The Highland Cow - More Than Just a Hairy Face

But what people don’t know is that compared to other breeds, Highland cows come out on top in many regards.

Here are the answers to the most common questions about these beautiful beasts, so you can find out that they’re more than just a pretty face. 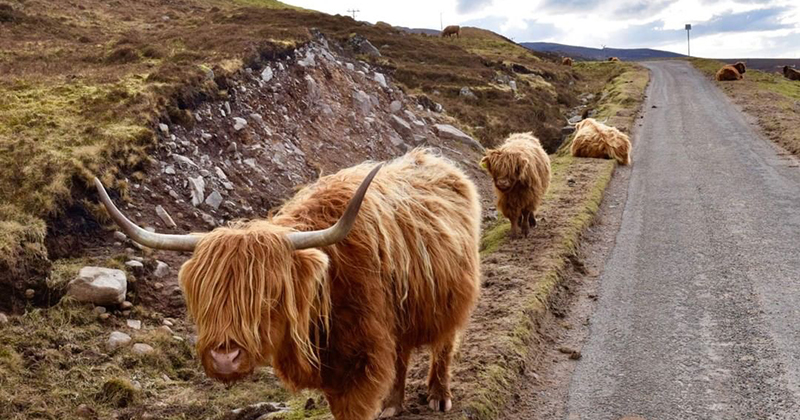 This is easy. They’re commonly found in the Highlands and ‘coo’ means ‘cow’ in the old Scots language. Scots is a variety of English that’s been spoken in the Highlands for hundreds of years. But it’s not the same as Gaelic. In Gaelic, you’d call a Highland cow a ‘ Bò Ghàidhealach’. Now, try saying that with a mouth full of haggis!

What’s with the long hair?

The first thing you notice about these cows is their unique long hair. They have a coarse outer coat which can be about 33cm long, as well as an inner coat which is shorter, softer and woollier.

This double coat provides natural insulation from extreme cold, heavy rainfall, and powerful winds. It’s also economical for their owners as there’s less need for expensive shelters and barns. Many other breeds cannot withstand cold weather and snow, but Highland cattle can live quite happily in these conditions. This makes them the first choice for herders in the Western Highlands, Alaska and Scandinavian countries.

Why are they ginger? 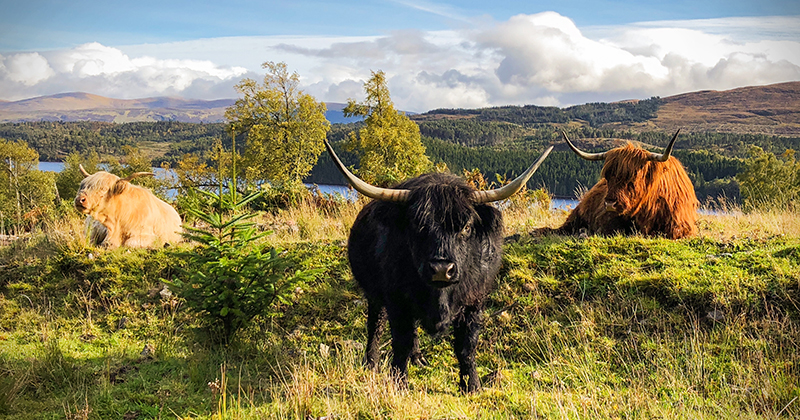 This is actually a misconception. Pictures of ginger Highland cows get shared a lot online because they’re unique and undeniably cute. However, their coats can be shades of black, brown, yellow, white, grey, tan, and even white.

Originally, the slightly smaller and black (or brindled) Highland cows were found on the islands off the west coast of northern Scotland and known as 'Kyloe'. The larger ones, mostly reddish in colour, were common in the remote Highlands of Scotland. Today, both these types of cattle are regarded as one breed - Highland.

Queen Victoria had a soft spot for the mighty ginger cows, which is one of the reasons why they’ve been bred more than the other colours of cows.

What are they bred for? 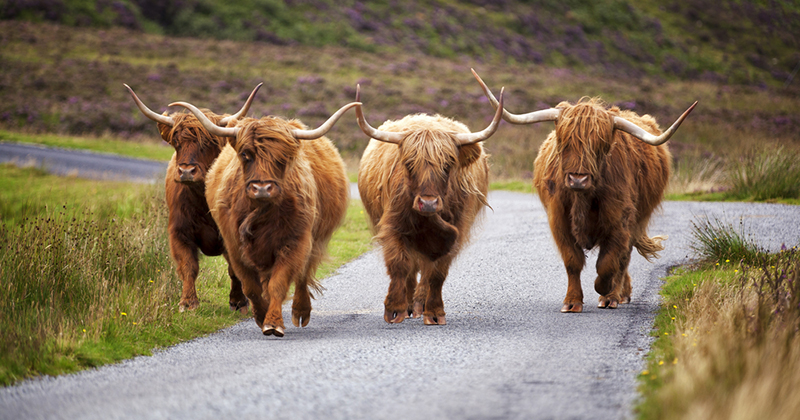 Highland cows are typically bred for their meat.

They don’t increase their feed intake until the temperature drops to -27 degrees Celsius, while other breeds increase their intake at 0 degrees Celsius. What’s more is with their thick coat of hair, they don’t have as much excess fat as other cattle. That’s why the meat tends to be leaner, with 40% less fat and cholesterol than normal beef. Which means the cattle convert poor grazing into lean, tender, marbled beef, and makes a real economic contribution to Scotland’s uplands.

How can they see past that long fringe? 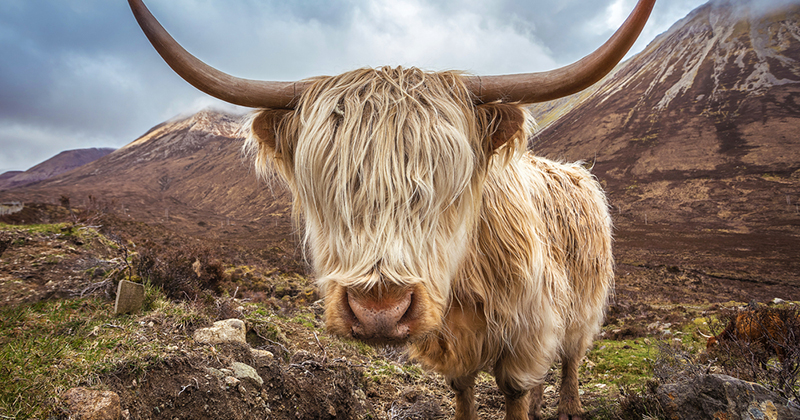 We’re unclear whether it’s their super-vision or heightened senses that enables them to navigate the rugged land with a long fringe (‘dossan’) blocking their view.

But even if they can’t see well, they certainly know what they’re looking for. During the day, they can dig through the snow with their horns to find food. This enables them to keep grazing where other cattle can’t.

Do they stay outside all winter? 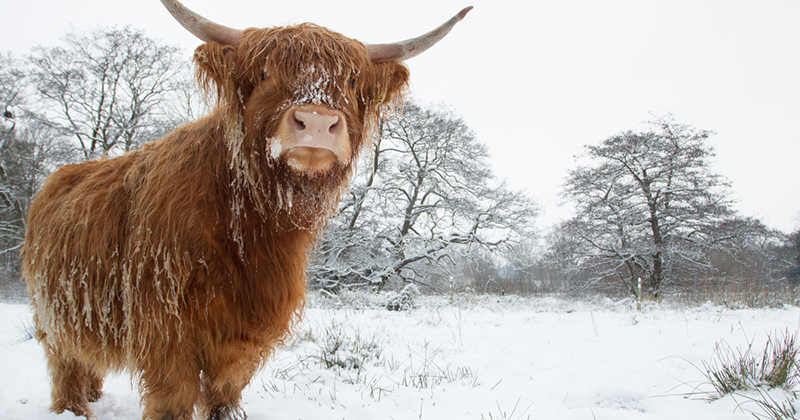 Ordinary cattle need the warmth of sheltered barns to protect them from the harsh winters. Whereas Highland cows are happy to embrace the cold and are often kept in open shelters made of stone called “folds” at night. You probably wouldn’t choose to sleep in an open-roof home in Scottish winter, so you can appreciate how tough these cows really are.

Difference between Highlands and other coos? 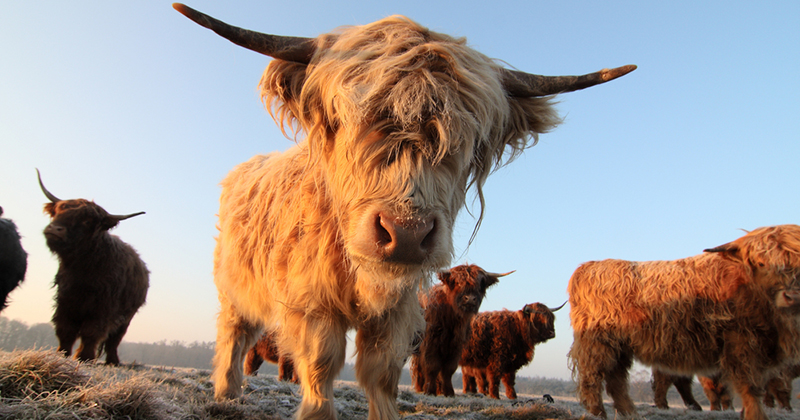 Highland coos are the oldest registered cattle breed in the world. Although, this is simply because their Herd Book predates all others.

They generally live longer and produce more calves than other breeds. It’s quite common for them to continue breeding past 18 years old, after having borne 15 calves.

The collective name for a group of cows is usually a herd. However, a group of Highland cattle is known as a “fold” – named after the open shelters they’re kept in over winter.

Are they friendly to humans? 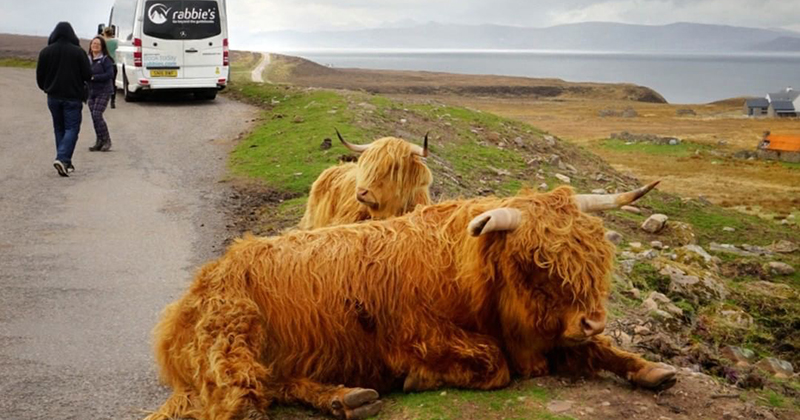 You might think that being placed on poor grazing ground in the freezing cold would make these guys a little grumpy.

But surprisingly, they have an excellent temperament and are renowned for their friendly nature. Highland cattle have a clear social structure and hierarchy of dominance, which means fights and aggressive behaviour rarely happens. So don’t be intimidated by their fearsome horns.

We believe their friendly nature is also the result of years of positive interactions with adoring tourists. They’ve certainly perfected photobombing.

Difference between males and females? 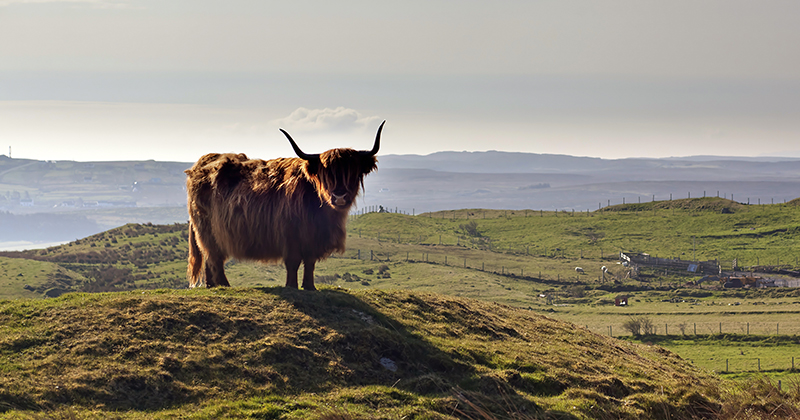 Bulls are mature males used for breeding, whereas a cow is a female that has had at least one calf. Heifer is the name given to a female not old enough to have calves yet.

The most noticeable difference between genders is their horns. A bull’s horns often grow forwards or even slightly downwards and have a much wider base. However, a cow’s face upwards and are longer and finer at the tip than a bull’s horns.

Can you milk a Highland cow?

While it’s possible, you wouldn’t get the same large quantities of milk you’d get from a dairy cow. Also, they have smaller teats and there’s a higher content of butterfat in the milk – not very tasty.

Where can you find them?

This is a tricky question.

Some of our driver-guides say there’s an unwritten rule to seeing them - if a traveller on the tour asks to see them, they never do. But if nobody asks, then they’re often out.

There’s no guarantee you’ll see them - even in a place you’ve seen them before. This is because they get moved around fields to new grazing grounds, so it’s hard to predict where the free-roaming ones will be on any given day.

But your best chance of seeing them is in the Scottish Highlands, Scottish Islands and Isle of Skye. They can sometimes be seen around Loch Lubnaig, the Isle of Mull, Applecross, Plockton, Loch Ness, and Loch Lomond. Photo opportunities can be limited as often there’s no parking spot next to them.

Outside of Scotland, you can find exported Highland cows in Australia, Canada, Denmark, Finland and the United States.

So, next time you see one of these photogenic animals with their just-out-of-bed hairstyles, you can look past their beauty and remember all the reasons for its super-coo status. Highland cows flourish where feebler cows can’t exist; live in freezing and wet weather; provide economic contribution to remote areas of Scotland by making use poor grazing ground; live longer; produce leaner meat; and have a friendlier temperament. As a breed, they’re exceptionally hardy and robust, making them worthy of their worldwide popularity.