Robert the Bruce: The Story of the Outlaw King

You may have heard the name. You might have seen his statue proudly guarding Edinburgh and Stirling Castle. You could have seen films that were inspired by his tales.

And if you haven’t, then you’ve not been in Scotland very long; because Robert the Bruce is one of the country's most beloved heroes.

Back in the past, Scotland and England weren’t exactly ‘friends’, and Robert the Bruce is famous for being successful at pestering the English during his reign as a king and as a fighter.

Here’s our take on his legendary story.

The Path to the Throne 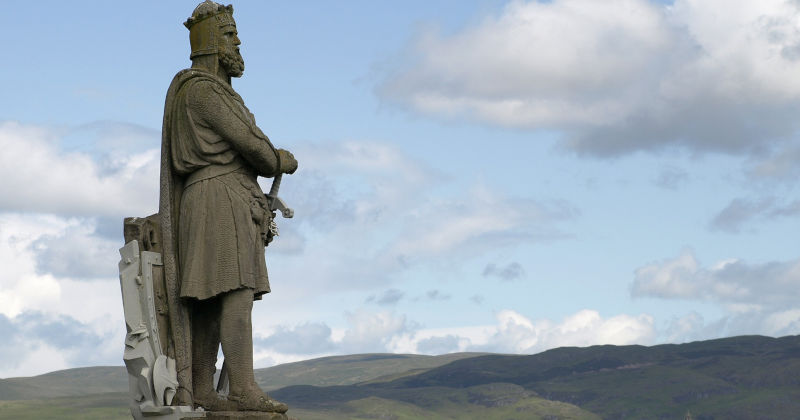 His family arrived in Scotland from France and his grandfather had a claim to the Scottish throne. And when you have a claim, there’s always a desire.

So, Robert the Bruce joined the Scottish rebellions and supported William Wallace’s uprising against the English.

But William Wallace was defeated at the Battle of Falkirk in 1298, and Robert the Bruce became a lowly landowner.

Yet, he still felt that he should be king. And so did one of the most powerful nobles in Scotland, John Comyn.

So, the two powerful Scots made a truce to work together for the freedom of Scotland. England hated this and managed to convince Comyn to betray his pact with Robert the Bruce.

Robert found out quickly and lost his temper. And in a heat of passion, he killed Comyn in a fight in a church. 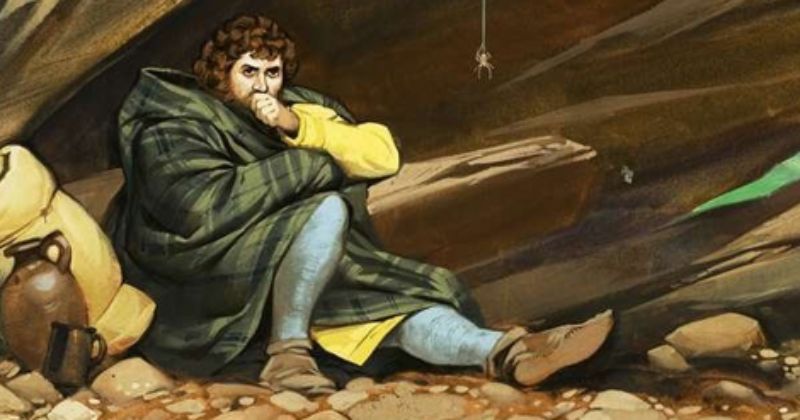 The Scots loved Robert the Bruce for standing up for Scottish freedom. But England and the Pope despised him for his blasphemous act in the church.

So, he became a fugitive king. Loved by the people but hated by the rulers.

For the next seven years, the English hunted him down. Five times he rose an army and fought them, and five times he was defeated. After his last loss, he took refuge on the islands on the west coast of Scotland. It’s said he was disheartened and sheltering in a cave when he looked up and saw a spider trying to spin a web.

The little creature threw a thread from one side of the cave to the roof, but the wind and rain kept putting it off. It tried four more times without success. “Five times has the spider failed,” said Bruce.

“That is just the number of times the English have defeated me. If the spider has courage to try again, I will try once more to free Scotland!” He watched the spider. It rested for a while as if to gain strength, and then threw its slender thread toward the roof of the cave. This time it succeeded. Bruce declared, “The spider has taught me a lesson. No more will I be discouraged.”

The Battle for Freedom 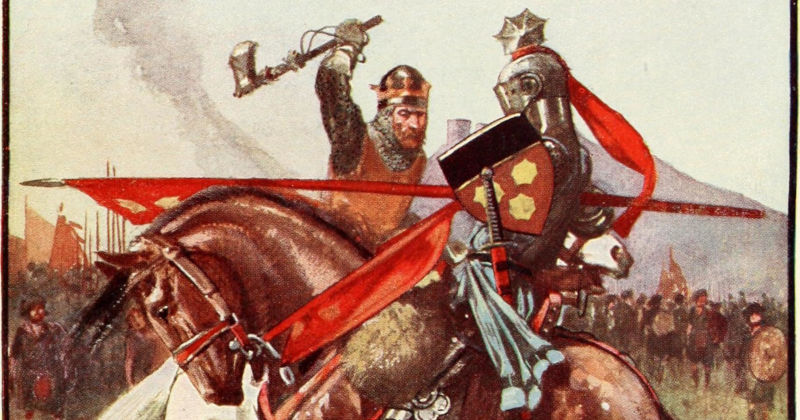 A new English king was on the throne and he paid little attention to Scotland.

So, Bruce worked hard and managed to capture nearly all the Scottish castles and united the Scottish nobles and chiefs under his illegal kingship.

The only castle which held out was Stirling Castle. The ‘key to Scotland’.

But the English did not want to lose reign of this castle. Edward II of England marched with an army of 20,000 men, the largest English army ever to invade Scotland. They arrived the day before midsummer.

This battle, the Battle of Bannockburn, opened with a famous collision.

An English knight spotted Robert the Bruce and charged across the field on his horse to strike him. Bruce stood his ground, dodged the lance and struck the knight with his axe. It split the knight’s head in two.

The Scots watched in awe as Robert the Bruce, their king, simply moaned that he had damaged his favourite axe. What a way to inspire your troops!

The battle raged on for two days and ended when King Edward II fled the field. He was chased by the Scots until he reached Dunbar and took a ship back to England. Bannockburn was a resounding victory for the Scots.

The Declaration: The Timeless Statement of a Nation 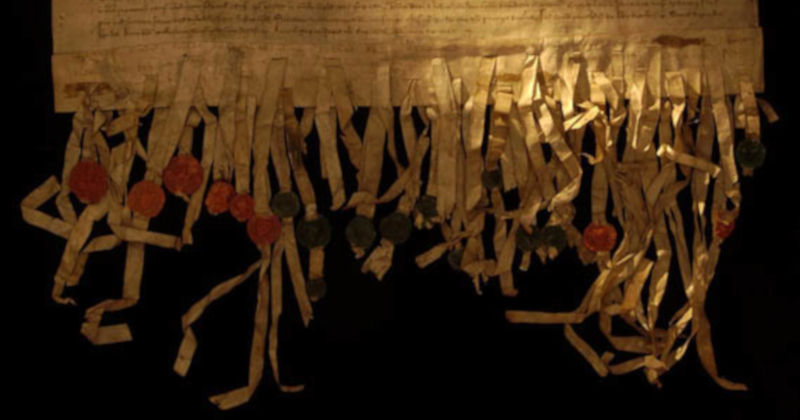 In 1320, the Scottish nobility and the ‘community of the realm’ sent a letter to the Pope declaring Robert the Bruce as their rightful king. This letter became known as the Declaration of Arbroath. The most famous line from the declaration states, “For as long as but a hundred of us remain alive, never will we on any condition be brought under English rule. It is not for glory, nor riches, nor honours that we are fighting but for freedom - for that alone, which no honest man gives up but with life itself.”

It's inspiring stuff, don’t you think?

The Journey to Redemption 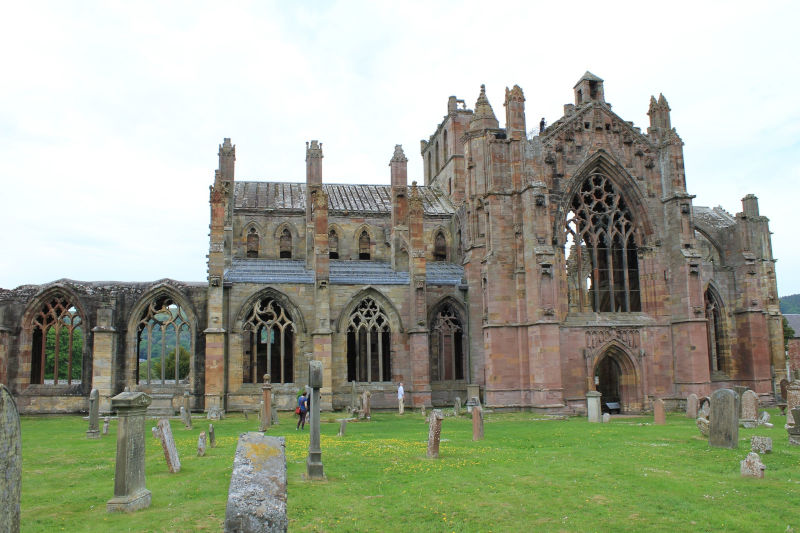 Robert the Bruce ruled over an independent Scotland until his death in 1329. On his deathbed, he asked his friend, James Douglas, to cut his heart out of his chest and take it on pilgrimage to the Holy Land. Douglas did as he was asked and placed the heart in a silver casket which he wore around his neck.

Unfortunately, Bruce’s heart didn’t make it as far as Jerusalem. Douglas and his army stopped in Spain to assist the Spanish king in his fight against the Moors. But the Scottish troops were defeated. And legend has it, before the battle took place, Douglas took the silver casket from around his neck and threw it ahead of him before charging into battle crying “lead on, Braveheart, lead on!”

The Moors were so impressed with the Scots’ bravery, they didn’t capture the survivors but allowed the surviving Scots to return to Scotland with the silver casket.

Robert the Bruce’s body is buried at Dunfermline Abbey, while his heart is buried at Melrose Abbey in the Borders.

And that’s the story of one of Scotland’s most famous kings.

Visit the places from the story on our tours of Scotland.

Did You Know These Facts About Edinburgh's Skyline?
Rabbie

A Review of the West Highlands, Lochs & Castles Day Tour with Rabbie’s
Briony