Scotland has a rich history, including the likes of Rosslyn Chapel, with many puzzles to uncover. And this is just another string to add to the bow. You contemplate whether there’s a monster in Loch Ness. You wonder why the ancient Scots loved stone circles so much. And you never quite understand how they came up with the recipe for haggis. But Rosslyn Chapel has got to be one of the most stimulating mysteries of them all.

Nowhere’s as thought-provoking as Rosslyn Chapel. This stunning chapel is located 7 miles outside of Edinburgh and has puzzled historians, movie-makers, and visitors for centuries. Intricately carved stone-work is laced with strange symbolism, ancient cults appear behind every story, and alien activity frequently gets reported by UFO hunters. And this is just a small insight into the fascinating tales behind this building. But we wouldn’t have it any other way.

So, we unearthed some of the strangest stories surrounding Rosslyn Chapel for you. Read on and see if you can solve the mysteries. 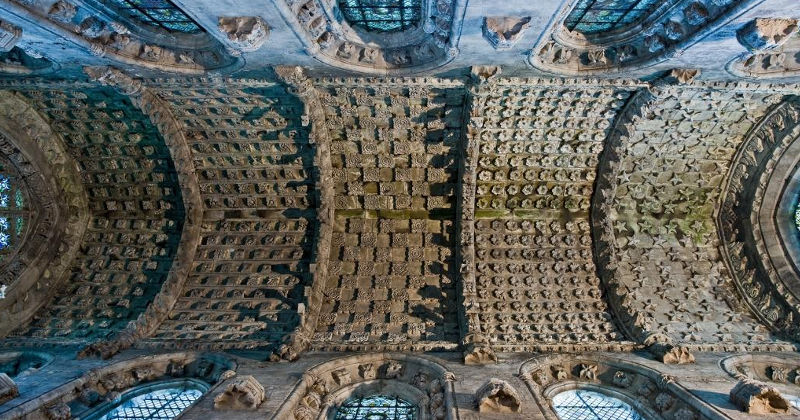 Whenever something is hard to explain, there’s always someone who claims that aliens are involved. And Rosslyn Chapel is no different.

They suggest Rosslyn Chapel is a stargate for extraterrestrials. A stargate is commonly thought of as a door or passage to another realm or universe. This thought is the idea they can pass into our world because of the otherworldly geometric patterns. The beauty and wonder of these patterns lead people to think they couldn’t be the work of humans.

But it’s not the only stargate. Some say aliens built the Pyramids of Giza, Stonehenge, and many more of history’s masterpieces. And the UFO hunters have a point, these are very strange artefacts of the past.

There’s even a little evidence for this theory. The area boasts more UFO sightings than average, and there are a few carvings that look a little like reptilian aliens. Do you believe the ancient Rosslyn Chapel could be a gateway to other worlds?

2. A Musical Masterpiece Within the Walls of Rosslyn Chapel 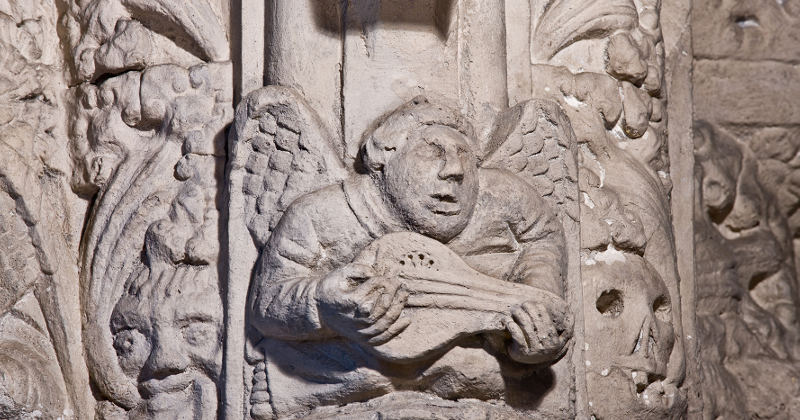 Everyone who visits Rosslyn Chapel is bewildered by the complexity of the detailed carvings.

So, it’s no surprise it intrigued a 75-year-old musician and his son, an ex-code breaker. The two of them visited the chapel and immediately knew there was something more to the unique geometry. They spent 27 years trying to crack the code.

And eventually, they had a breakthrough. They saw angels playing instruments and 213 geometric cube carvings accompanying them in the arches. And to their amazement, they found the geometric patterns on the cubes correlated to a Chladni Pitch. These are the patterns sand and liquid makes on a flat surface when certain musical tones are played.

By looking at these for the notes and an angel that points to a musical staff for the key, they managed to understand the architecture as a giant musical score. You can listen to the piece of music for yourself.

You may want to believe this story from the Rosslyn Chapel because it sounds like something straight out of your favourite conspiracy movie. But there’s holes in the theory. You could argue the pattern’s similarity to the Chladni Pitch is coincidental. And how did these architects create this 200 years before the Chladni Pitch was even invented? 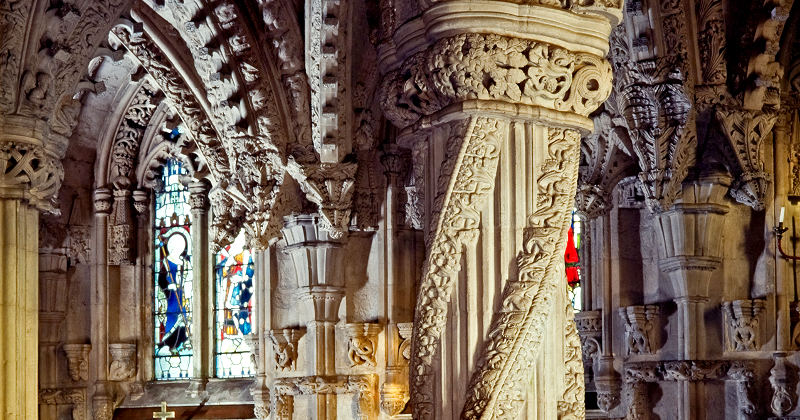 Rosslyn Chapel’s beautiful stonework is incredible - and perhaps the highlight is the Apprentice Pillar. Yet the story behind this pillar isn’t so lovely. It’s actually a little scary. Here’s the condensed version of the tale.

While building the Rosslyn Chapel, the master mason went to Rome for inspiration. He entrusted his apprentice to follow his instructions until his return. Yet the apprentice was an ambitious young man, so he started changing the designs and created this pillar himself.

If you thought this would impress the master mason, you’re gravely mistaken. When the master mason saw that this pillar was far too beautiful to be one of his own creations, he was enraged by jealousy. He struck down the apprentice in rage and killed him.

No one knows if this is fact or fiction. But there’s some evidence supporting the story.

Firstly, there’s a carving of a young man with a mysterious cut on his forehead, possibly signifying the dead apprentice. And secondly, the history books tell us the chapel's construction was delayed at one point because of a violent deed. Who knows what this talented apprentice could have created if he had continued his life. 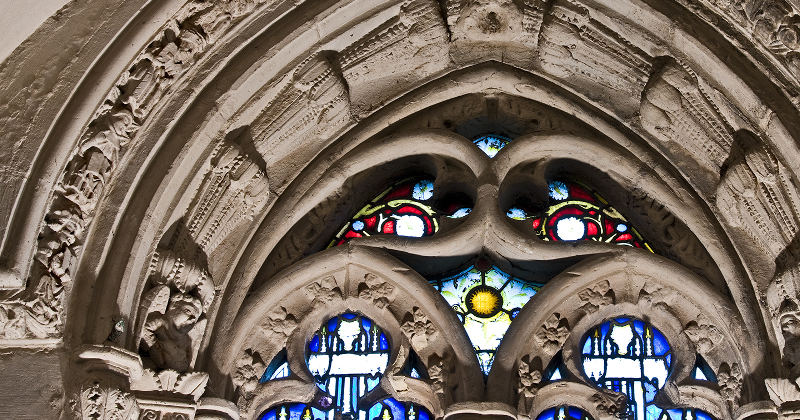 You can easily spot symbolism in a lot of cathedrals and churches. You can also find the stories of Christ, the Virgin Mary, and all the saints. But in Rosslyn Chapel, there are unexplained motifs.

Then there’s a carving of corn. This may sound like the most uninteresting thing within the mighty Rosslyn Chapel, but it’s completely, maddeningly mind-blowing. Because it looks exactly like a cob of corn. And this chapel predates Christopher Columbus’ journey to America. How on earth did Scotland know about America’s indigenous plant life?

Most famously, you find the green man carvings. There are a hundred of these dotted around the Rosslyn Chapel. But why? The green man symbolises the pagan gods that Christianity had banished. So why would this church allow them to be depicted everywhere?

5. What's Buried Beneath the Rosslyn Chapel? 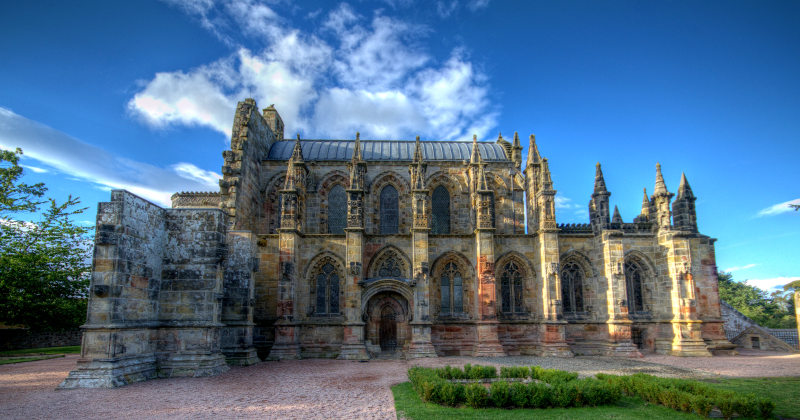 Dan Brown’s The Da Vinci Code explored one of the strangest mysteries of Rosslyn Chapel: the conspiracy that connects it to the notorious Knights Templar. It depends how deep you go, but this theory can entangle the crucifixion cross, the blood of Jesus, the head of Jesus, the holy grail, and the knights themselves. It's a grandiose story that's as intriguing as it is fun.

Here’s our summary of the Rosslyn Chapel tale.

In 1119, the Roman Catholic Church founded the order of the Knights Templar. They were exempt from all local laws and answered only to the pope; their innovative banking systems throughout the crusades gave them power over 1,000 fortifications; and they were always the first into battle.

It’s even said at the Battle of Montgisard, an army of 500 Templar soldiers defeated an army of 26,000.

During the Crusades, they acquired the remains of the Solomon’s Temple that’s referenced in the Bible. It’s not known what they found there; it could have been the Holy Grail or even the remains of Jesus. But whatever it was, it made them extraordinarily powerful.

The Crusades came to an end in the 13th century because the Islamic armies became more united while communication issues pervaded the Christian factions. The end of this war gave the Templars less purpose, however after 200 years of integration they still had power and authority in towns throughout Europe.

The Templars became a ‘state within a state’, and this created a whole lot of tension. What’s more, King Phillip IV of France hated the Templars because he was in debt to them after using their services in his war against the English.

So, he seized upon the dark rumours that entrenched the Templars and ordered their arrest. It didn’t take him long to have them burnt at a stake for practising indecent kissing, financial corruption, and false idolisation.

But legend says many of the Templars escaped to Scotland with the treasure from Solomon’s Temple. It was a safe place to hide. They weren’t outlawed there, and they owned land. One of their properties was only nine miles from Rosslyn Chapel. There are many theories that support this idea. The St. Clair family had ties with the Templars, Robert the Bruce fought with them, the chapel has a hidden chamber, and there are Templar symbols within the chapel.

Though sadly, there are no solid facts to support these theories. But that doesn’t mean you can’t enjoy the intrigue and excitement that’s offered in The Da Vinci Code, The Holy Blood and the Holy Grail, and other fictional conspiracy books.

Explore the Rosslyn Chapel for Yourself

Intrigued by the stories and mysteries surrounding the Rosslyn Chapel? Visit the grounds yourself on a 1 day tour of Rosslyn Chapel & Scottish Borders. Travel in comfort aboard a 16-seat mini-coach and let our driver-guides enchant your ears with more insights into the legends we uncovered in this post. If you haven’t got a specific date set for your next trip, why not stay up to date with our latest offerings by signing up for our newsletter. That way you can be sure not to miss out on any new departure locations and tours.

5 Reasons to Take Your Date on a Day Tour
Rabbie

9 Reasons Why You Should Try a Staycation This Year
Rabbie

Which Outlander Clan Do You Belong to?
Rabbie

Poldark: Our Guide to Filming Locations in Cornwall
Rabbie