Why Do People Kiss the Blarney Stone?

The Blarney Stone is one of Ireland’s great mysteries. But this hasn’t stopped thousands from visiting for a kiss. Winston Churchill, Mick Jagger, the Simpsons, and millions of others have kissed the Blarney Stone after hearing of the tales.
But why does everyone do it? It’s incredibly unhygienic, the rock is positioned at the top of a ruined castle, and hard surfaces are terrible kissers.

Well, in all honesty, nobody knows. Having a Blarney Stone smooch is supposed to give you the ‘gift of the gab’, and the ability to communicate with eloquence and wit. But no one is certain how or where this unique tradition originated. Yet that doesn’t stop people making up fantastical myths surrounding the stone.

So, we’re going to take you on a journey through all the ancient stories people have proposed to explain this Irish rock’s magic powers. Some are reasonable, others are inventive, and a few are just plain mad.

Read on and decide which one you believe.

What is the Blarney Stone?

The Blarney Stone is a formation of Carboniferous limestone rock located at the top of Blarney Castle in County Cork, Ireland. Legend has it that this attraction was built into the castle in 1446. Since then, thousands have been drawn to visit by its myths, legends and even good luck.

Myth #1 - The lord and the goddess 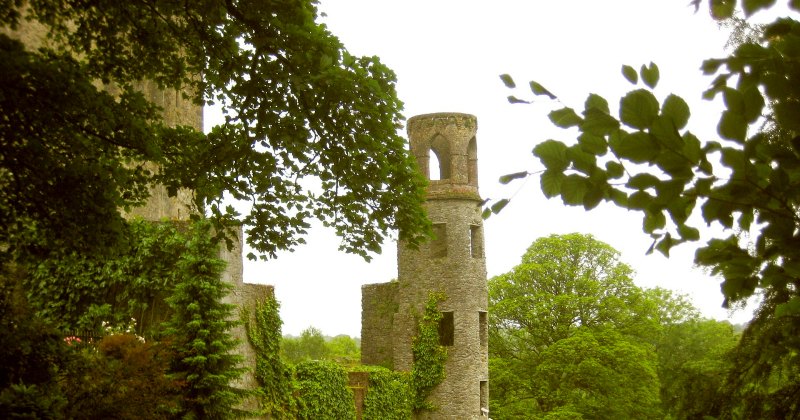 Cormac Laidir McCarthy built Blarney Castle. But this achievement didn’t make him happy and that’s because he had a difficult lawsuit hanging over his head.
So, he did what everyone does in times of trouble: he prayed. And he was answered by the ancient goddess of love and beauty, Clíodhna.

She told him he’d win his legal battle if he kissed the first stone he saw on his way to court. It sounded mad, but Cormac was ready to believe anything.

So, on the morning of his trial, he spotted a stone (now known as the Blarney Stone) and gave it a big, wet, sloppy kiss.
And when he arrived in front of the judge and jury, he suddenly spoke with great eloquence. His words wove together like a fine tapestry, and against all odds he won the lawsuit.

Cormac decided to lay the stone he kissed in his castle to commemorate the goddess. It was the final piece placed in Blarney Castle, and finally he could look at his home with feelings of pride and joy.

The existence of Irish gods is questionable.

In the 16th century, Queen Elizabeth I and the English were forcing Irish lords to sign away the rights to their land.
But Cormac Teige McCarthy, the Lord of the Blarney Castle, despised this ruling.
So, he asked a wise old lady what he should do about this. And she sarcastically told him to ‘kiss a rock’. Cormac was a bit cheeky, so he surprised both the rock and the old lady and snogged a slab of stone.

But after he kissed what we now know as the Blarney Stone , he had a flash of inspiration. So, he immediately set off to see the queen.

When he arrived in the queen’s court, his words flowed like decadent wine, and he convinced her not to take his land. He proudly set off back to Ireland and gave the rock another passionate kiss.

But when the queen realised she’d been duped, she sent the Earl of Leicester to take Cormac’s land.

Yet, Cormac invited the earl to lavish dinners, boisterous booze-ups, and incredible parties. So, the earl started to love Cormac, and in each progress report he sent to the queen, the earl wryly told her that the castle still hadn’t been taken. Every time there was another excuse.

Eventually, the queen read a letter and threw it to the ground in frustration. She said, “It says nothing at all, it’s all blarney!”.

And even though Cormac thought the old woman who told him to kiss a block of rock was talking blarney, he still treasured the rock that may have helped him keep his land. So, he hoisted the stone into a prime position in Blarney Castle and kissed it every night for evermore.

Myth #3 - The lord and the Scottish stone 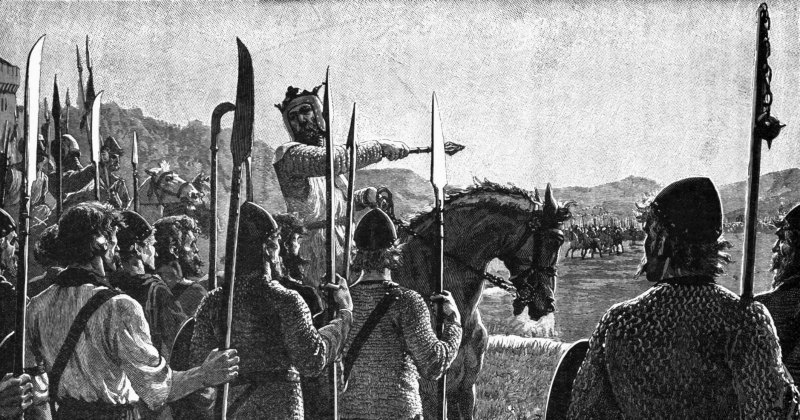 This next Blarney Stone myth comes from a great intersection between Irish and Scottish history. One of the most important battles in Scottish history is the Battle of Bannockburn, 1314.

It’s when Robert the Bruce and 10,000 Scots defeated a well-prepared English army of 17,000 soldiers. The aftermath of this battle resulted in a treaty that established an independent Scotland for many years.
And according to legend, Scotland wouldn’t have won it without the lord of Blarney Castle.

They say Cormac McCarthy admired the Scottish revolution and gave Robert the Bruce 5,000 of his soldiers to fight in this important battle.

And after the Scots won, Robert the Bruce thanked Cormac by giving him a stone.
But this wasn’t any stone. It was a piece of the fabled stone of destiny. It was the block that had been used to crown the Kings of Scotland for centuries.

Maybe if you had such a precious piece of history in your possession, you’d believe that kissing it could give you some form of charm.

Recent scientific tests have shown the rock comes from Ireland. 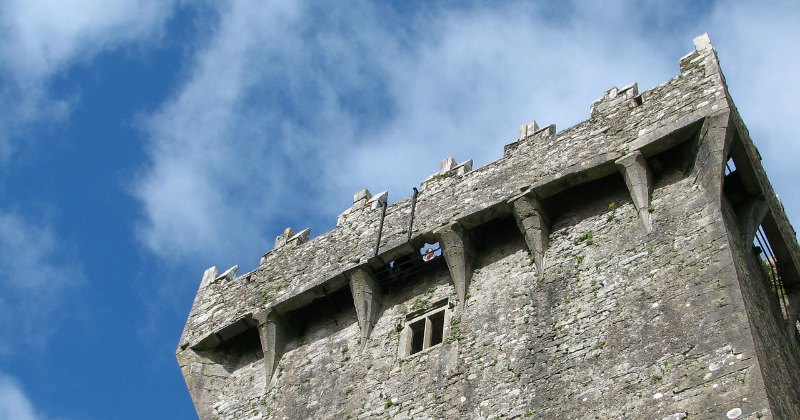 So, these are a few of the stranger Blarney Stone stories. Most of these theories are completely unsubstantiated, and there’s almost no research on why, how, or when such ideas came about. But that doesn’t mean you can’t enjoy these fanciful flights of the imagination.

- In Iona, a Scottish island, the Blarney Stone was the deathbed pillow for St. Columbo

- It's the famous Stone of Jacob, the pillow Jacob slept on as he had a vision of god

Biblical figures, ancient saints, and witches are unlikely to have had anything to do with this rock.

How to kiss the Blarney Stone 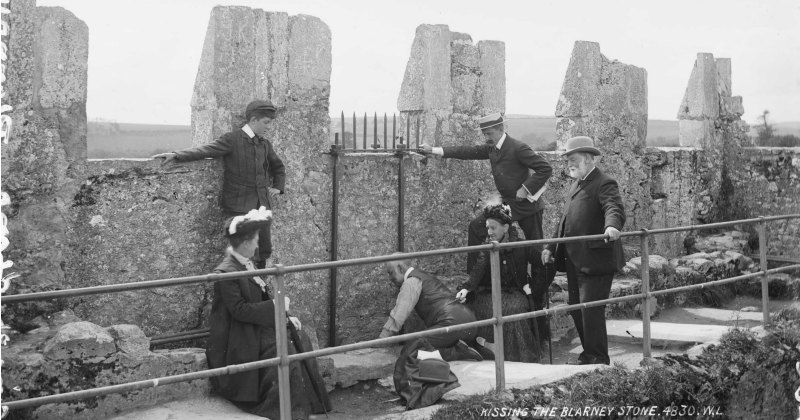 To learn how best to kiss the Blarney Stone, you first need to be brave enough to dangle yourself over a gaping hole in the castle floor. Yes, that's right, the stone is positioned over a high drop. But fear not. New safety features means there are bars for you to hold onto either side.

The process of kissing the Blarney Stone may go as follows:
- Arrive at the stones location within Blarney Castle
- Wait for your turn - This can be up to 30 minutes in the high season (May - September), but during quieter months (October - April) there are almost no queues at all
- When it’s your turn, you will lie on your back while a person holds you over the edge of the drop. While in this position, you’ll lean your head back upside down and kiss the Blarney Stone.

Pressing your soft lips against rough rock isn’t even the best thing about Blarney Castle. The grounds boast a poisonous garden, woodland walks, and a jungle. The castle architecture looks both magical and warlike. And there’s an ancient cave dwelling, a beautiful lake, and a dungeon to explore. 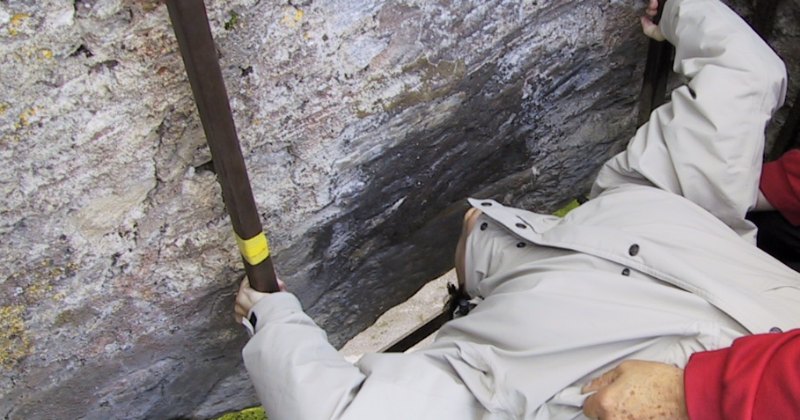 Kiss the Blarney Stone on an Irish Tour

Have all these myths got you thinking about kissing the Blarney Stone for yourself? If so, venture across Ireland with Rabbie’s. It takes three hours to get to Blarney Castle from Dublin, so it’s best to do it as part of a multi-day trip from our Dublin departure point. As standard, our tours are guided by our driver-guides who have years of experience and plenty of stories to share. You’ll also travel in the comfort of our 16-seat Mercedes tour buses, which feature large windows and USB charging points.

We hope you enjoyed our stories, myths, and facts about the Blarney Stone. You may not believe in the fanciful legends, but remember, Winston Churchill did become Prime Minister of the United Kingdom after kissing the stone…

An Interview with our Guide, Andy Dickinson
Rabbie

How Can I Avoid the Notorious Highland Midges Bites?
Nicola

36 Scottish Food and Drink You Must Try
Rabbie

12 Reasons to Visit the Dingle Peninsula in Ireland
Rabbie