Everything You Need to Know About Puffins

If you binge-watch kitten videos and obsess over your friend’s new puppy, you’ll probably love puffins.

These cute, uniquely shaped creatures are enamoured by millions of people around the globe. This is both because of the bird’s innocent looks and, as you’ll see, extraordinary behaviour. Let us explain.

Puffins spend two-thirds of the year at sea

For eight months of the year, puffins live on the ocean, happily bobbing up and down on the waves. These pint-sized birds are well adapted for sea life and enjoy devouring fish. When the warmer spring weather arrives, they head to land for breeding – usually around May to August.

Their beauty fades during the winter

Unfortunately for puffins their good looks fade away at some point each year. One of their most distinct features, the brightly coloured parrot-like beak, loses its technicolour in winter. But when breeding season starts on land, their vibrant appearance returns in time for them to attract a mate. 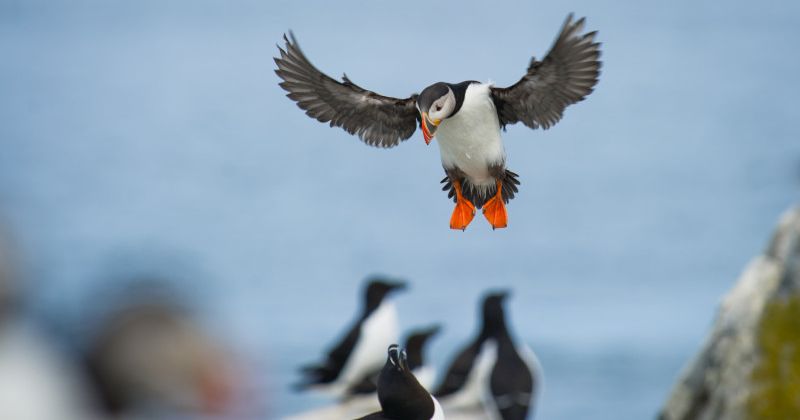 The ‘Clowns of the Sea’

Ever wondered how they got this nickname? Partly because of their colourful faces, but mostly for their flying skills. More specifically, their landing and take offs. Once in the air they’re skilled pilots and flap their wings an impressive 400 times a minute. They can even reach speeds of 80kmph.

However, because of their wing size in relation to their overall weight and shape, their take offs and landings are hilariously inelegant. If you ever need cheered up, perch on a clifftop and revel in the sight of face-plants, tumbles and skids from these clumsy aviators.

…Or the ‘Sea Parrots’

…Or even the Arctic Monks?

Their unusual Latin name, Fratercula arctica, translates to Arctic Monks. Back in the old days people must have thought their black feathers resembled a monks’ robe.

Love is in the air in Iceland. Well, at least two thirds of puffins decide to breed there anyway. We’re not sure if it’s the cool climate or gorgeous scenery that attracts them. But we do know that most Atlantic Puffins choose the coastline and islands around Iceland for courtship. It’s estimated that there’s between 8 and 10 million puffins in Iceland’s colony. 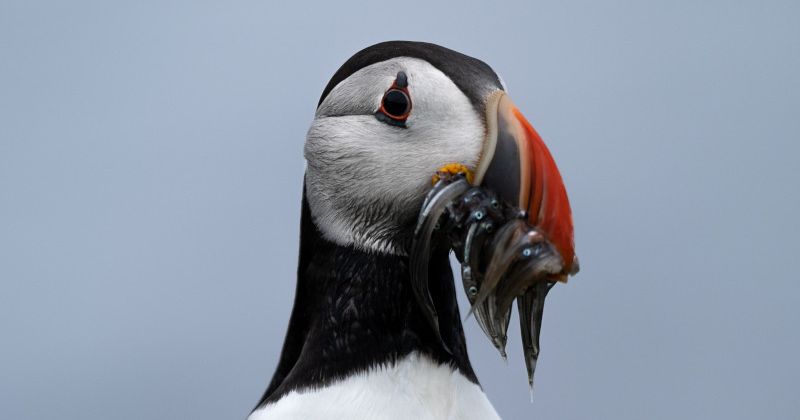 Commonly mistaken for silver whiskers or a dapper moustache, you’ll often see multiple fish hanging out of a puffin’s mouth. Unlike many birds which regurgitate their food for their young, puffins carry up to ten fish in their mouths back to the burrow. These skillful hunters use their spiny tongues to press the fish against the roof of their mouths, securing the catch until they get back to their hungry chicks.

Besides being black and white, puffins share more similarities with penguins. They both only have one egg per year. And male and females take turns incubating the egg and raising their young. Both species also choose just one mate for life.

These birds can fly under water

The sky isn’t the limit for puffins. They’ve mastered both flying in the air and swimming underwater. It’s common for them to swim up to 60 meters under the surface while hunting for fish.

Puffins are silent at sea. But during breeding season on land, males tilt their head back and give a piglike grunt to charm a female. And once in their breeding burrows, their growl resembles a muted toy chainsaw.

Where can you see them?

In Scotland, your best chance to see them on our tours is in Staffa or Orkney. May to August is their breeding season, but unfortunately, we can’t guarantee you’ll see them. Wild animals are unpredictable. You can also see them on Skomer Island off the coast of Wales and the Cliffs of Moher in Ireland.

Outside of the UK, you can visit Iceland as they can be found on all coasts north, south, east and west. A puffin paradise. 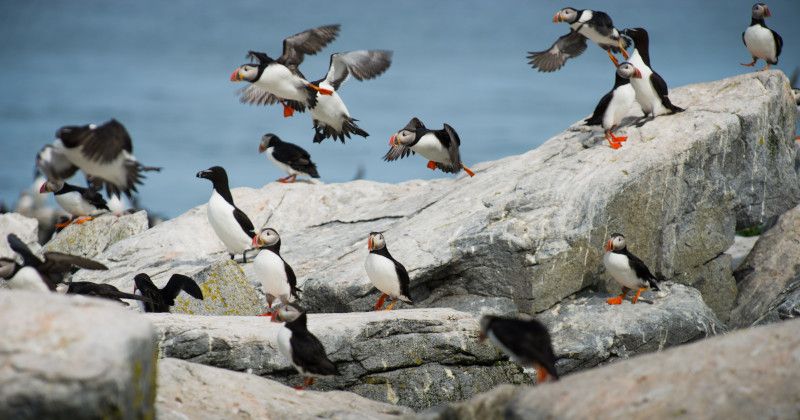 We need to protect and cherish our puffins. They’re under threat and vulnerable.

In 1967, an oil spill killed 85% of the French puffins. Right now, sea bird trophy hunting tours around Iceland have contributed to a 23% decline of puffins in just a decade.

Puffin breeding populations are concentrated in a small number of sites which means changes in fish populations or invasive species can wipe out entire colonies.

Perhaps the largest threat is the rising sea temperature, This reduces the amount of plankton in the ocean which in turn decimates the small fishe puffins eat.

So as always, eat sustainably and tread lightly wherever you go to help save these beautiful birds.

You can learn more about how you can help our puffin’s plight at the Scottish Wildlife Trust and Save Puffins.

And of course, you can try to spot these beautiful birds with the help of our guides onboard our tours across the UK & Ireland.