What's the Difference Between a Castle and a Palace?

Castles ignite the imagination. When you wander around you envision grand feasts and gorgeous aristocrats. You feel as if you’ve been transported to the past.

As you explore you start to question things: whose room is this? Is that a secret passage? Why is that small chair worth more than the combined value of all the houses in my neighborhood?

But then the questions stop.

They’re replaced by one question that jeopardises the meaning of everything you’re experiencing: Is this actually a castle? There are no turrets, there’s no moat and it looks utterly useless for siege warfare. In fact, compared to most castles it looks like a namby-pamby. So why isn’t it called a ‘Palace’ or ‘ House’?

What’s more is that there are loads of places that pose this problem, take a look at these culprits:

Plush interior, pristine gardens, perfect greenhouse: you’d be forgiven for thinking this was a countryside pad rather than a castle.

We don’t think this impeccably trim garden is going to ward off any Norman invasions. 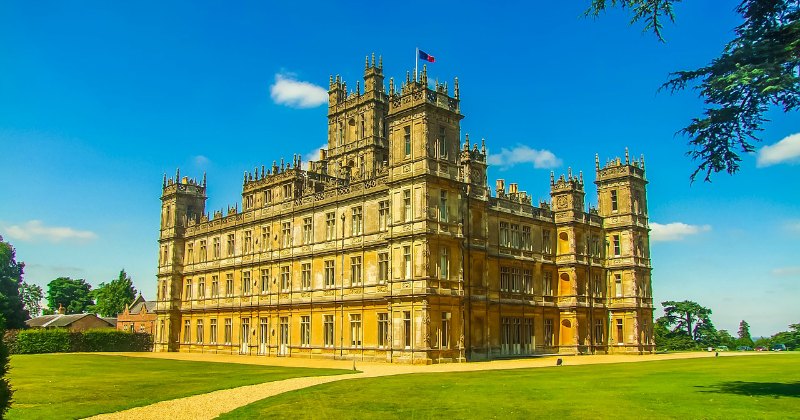 So what is it that makes a castle? Is it the walls? The moats? Is there a defining feature at all? Well, like lots of answers to questions on definition, it’s a mixture of many things. So let’s begin with a quick look at the etymology.

The word ‘castle’ derives from the old English word ‘castel’, which meant village. Villages were often fortified, but in peaceful times the villages expanded, leaving only the central part fortified. The twists and turns of the English language then created the word ‘castle’ to describe this fortified part of villages and towns.

And now the Oxford English Dictionary defines a castle as ‘a large building, typically of the medieval period, fortified against attack with thick walls, battlements, towers, and often a moat’.

So here’s our first answer: a castle can be defined as being architecturally prepared for battle.

But hold on. This doesn’t answer our question. Because those buildings above are called castles, but they look as architecturally prepared for battle as a fruit pastille. So let’s look at the word ‘palace’ and see if that clears anything up.

Palace came from the Latin ‘palitium’. This was the name of a hill in Rome where the emperor lived. Latin speaking Rome pretty much ruled the world, so it followed that the word ‘palitium’ was used for any building where nobility and rulers lived.

The word was then Francophised and Anglicised into the word ‘palace’: “A large and impressive building forming the official residence of a ruler, pope, archbishop…” So a ‘palace’ is an elite residence.

But wait a second. This doesn’t clear anything up and still doesn’t answer your question. It makes it even more confusing, because loads of castles have been homes to royalty and rulers, and yet they’re still called castles.

So here’s where we get to the bottom of it. Castles that aren’t suited for battle are called castles because they were either built on top of an old castle or are a seriously renovated old castle.

People stopped needing such defensive buildings because of widespread sovereignty and the changes in the technology used in warfare. This meant any castle rebuild or renovation in the UK after the 18th century, had the sole purpose of making something grand and fancy. And after the beatifications the stakeholders kept the name ‘castle’. Hence why you’ll find lavish castles.

So what about the palace problem?

Palaces are only palaces if they are exceptionally lavish and built with the intention of being a home. So you can’t call any old building a palace just because royalty decides to live there for a while; it had to have been built for that purpose.

So that’s your answer.

As always there are exceptions. People won’t always take heed of the rules and just call their modern one-bedroom flat in Nottingham a castle anyway. But this isn’t really a problem. Because at the end of the day, castle is really just a name.

Well, we hope this helped answer your question. And if you want to let your architectural passions go wild, you can check out some our tours that focus on castles and palaces. We have day tours to Alnwick Castle and Culzean Castle, a 3 day tour in Ireland to Blarney Castle, a 4 day Scottish Castle Experience, and many more.