Top Things to See and Do in Seville: The Ultimate Guide

Seville: the birthplace of flamenco, orange trees, three UNESCO World Heritage Sites, and high temperatures. As Spain’s fourth-largest city and Andalusian capital, it’s attracted an influx of different cultures throughout history. And they’ve all left their mark on the cityscape. Its laid-back atmosphere, golden-yellow and white buildings scattered across the city, and rich tradition make it a wonderful place to visit. 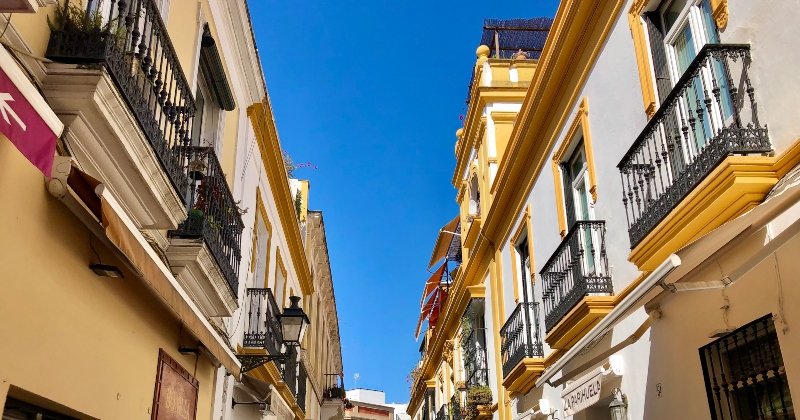 The founding of the city: a Herculean task?

So, how was Seville founded? You must have heard about the Greek half-god Hercules, Zeus’ son with superhuman strength. Legend has it he also created the vibrant city of Seville.

As with any juicy story, it begins with a love pursuit. Hercules fell overwhelmingly for the Phoenician goddess Astarte. She didn’t feel the same. But he was insistent, and the poor goddess had to flee to get away from his relentless advances. She took off down the River Guadalquivir, and he followed, hot on her trail. Astarte turned right in her efforts to get away from him and founded Triana – today an area part of the city. Her cunning tricked him, and he made a wrong turn. Lost and defeated, he abandoned his chase and discovered a new love interest; the land on the other side of the river and named it ‘Hispalis’, the first name for Seville. 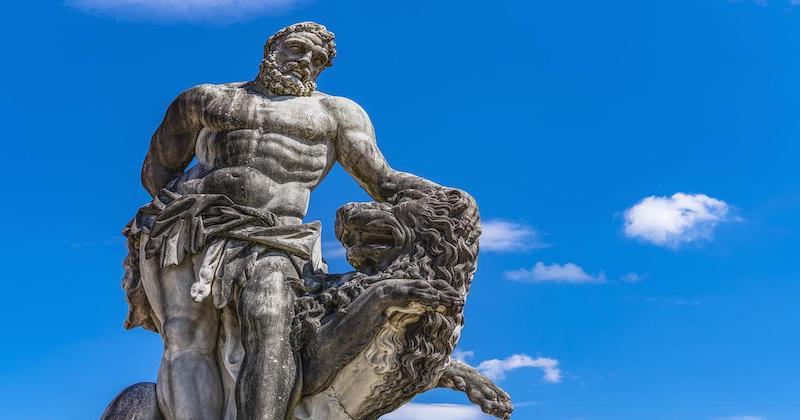 Whether or not you believe the myth is up to you. But there are remnants around the city which pay tribute to the hero, like the Alameda de Hercules. The large square and popular hangout spot is full of restaurants and bars. It also features Roman columns with him overlooking the square. However, there is a more likely story, which is perhaps less melodramatic. 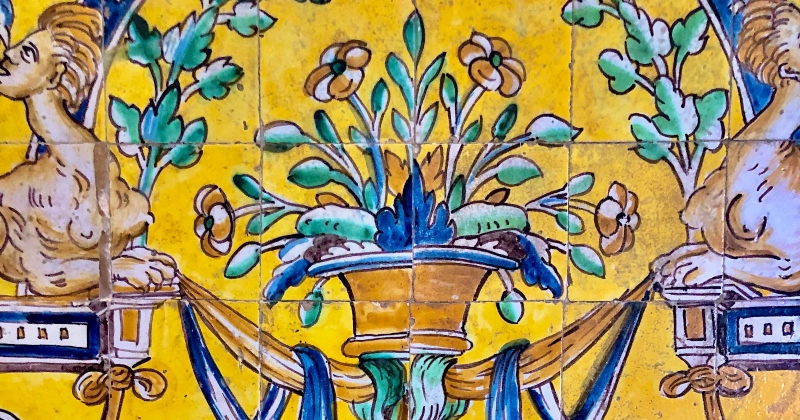 What's in a name?

Over 2,200 years old, it’s thought that Seville’s emergence is thanks to the Romans. But it was actually founded earlier in the 7th century BC by the Phoenicians. The ancient, sandal-wearing, conquerors called the city ‘Hispalis’. They stole and Latinised the name and city from the Phoenician people. Their name for Seville was ‘Hisbaal’, from the word ‘Spal’ meaning ‘lowland’ in their ancient language.

Subsequently, when the Islamic conquest took place in 711, Seville became ‘Ishbiliyah’. And a few centuries later the Umayyad dynasty in Southern Spain disintegrated and became part of the Castilian Kingdom. The city then realised its final name ‘Seville’ in 1248. You’ll completely understand why all these ancient civilisations fought over this stunner of a city when you get here. 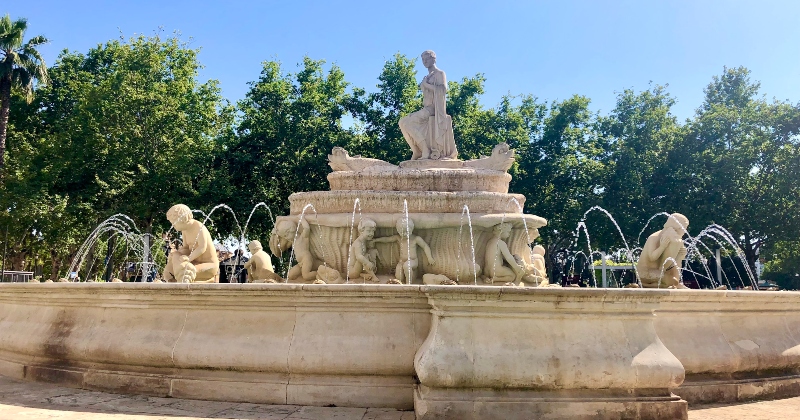 Seville has a lot to offer; ancient palaces, Roman ruins, a strong ceramics tradition, and thousands of tapas cafés/bars. There’s something for everyone. No wonder it’s referred to as the ‘Pearl of Andalusia’.

With so much to see and do, it can feel a bit overwhelming. So, we’ve compiled a list of the best sites that will help to make the most out of your time here. Put on your espadrilles, grab your fan, and pop a flower in your hair to dance your way to the Sevillian dream. Oley! 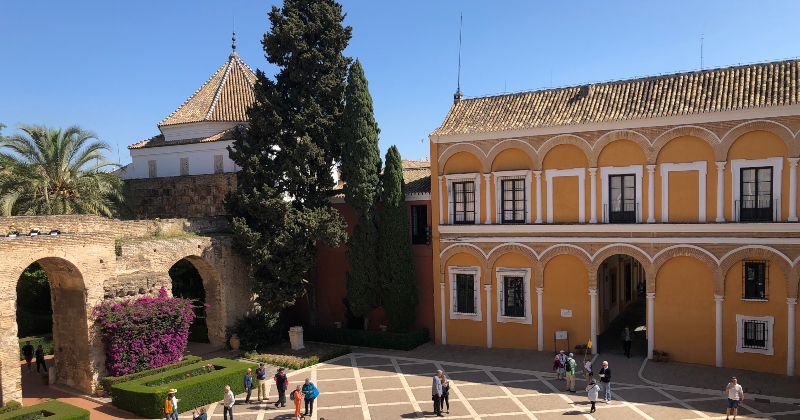 Number one on our list is the Royal Alcazar Palace. It now stands in place of what was once the 10th century Abbadid Muslim ‘Alcazar’, used by the rulers of the previously Moorish province. The word ‘alcazar’ comes from the Arabic ‘al-qasr’ to mean ‘the castle’ or ‘the palace’. 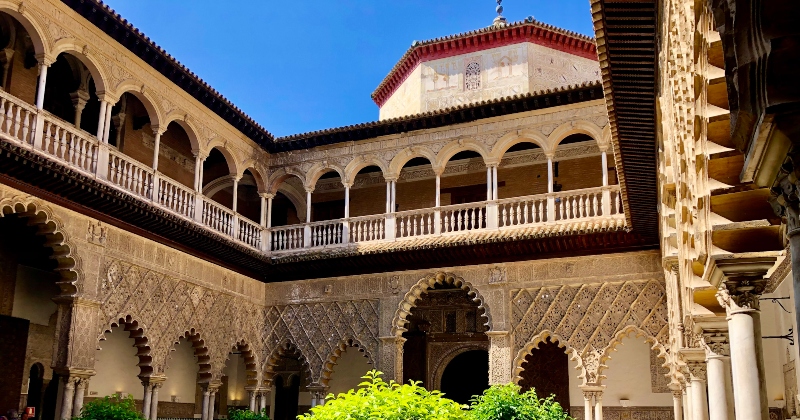 Although the original Moorish structure was removed and rebuilt for the Christian king Peter the Cruel of Castile, the palace kept its Islamic flare. There is little left of the original, but over the centuries new rulers added to the complex, making it a cultural and architectural concoction of different styles. The result is an archetype of the Mudéjar style the Iberian Peninsula is so famous for. Amazingly, it’s still used by the Spanish royal family on their visits to Seville, making it the oldest functioning palace in Europe. 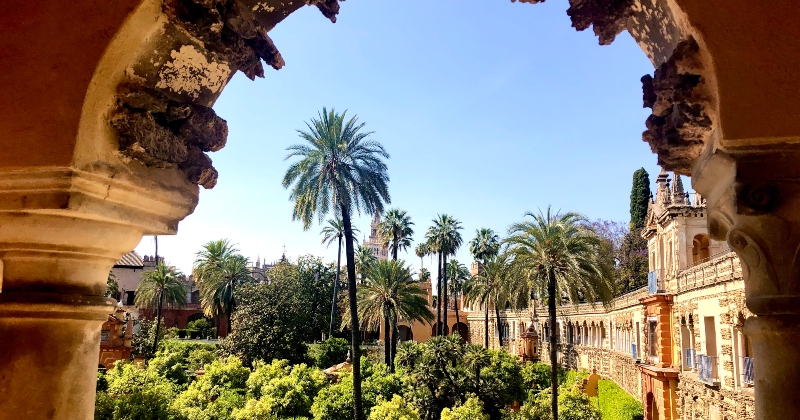 When you visit, be prepared to get lost in a maze of rooms and courtyards decorated by excellently preserved tiles, elaborate Islamic ornamentation, and a vast garden complex. It truly warrants its UNESCO World Heritage Site status. And if you’re lucky, you might even spot a peacock or two. 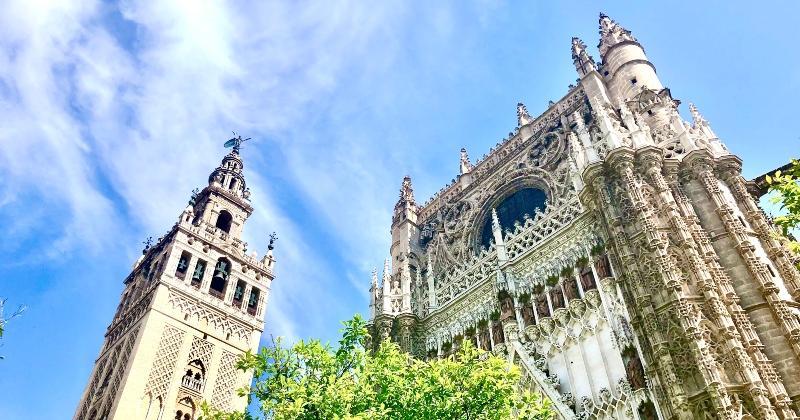 Just outside the walls of the Royal Alcazar, you’ll find another UNESCO World Heritage Site, the Cathedral of Saint Mary of the See or ‘Catedral de Santa María de la Sede’. It’s impossible to miss due to its huge stature, as the third biggest church in Europe and the largest Gothic church in the world. 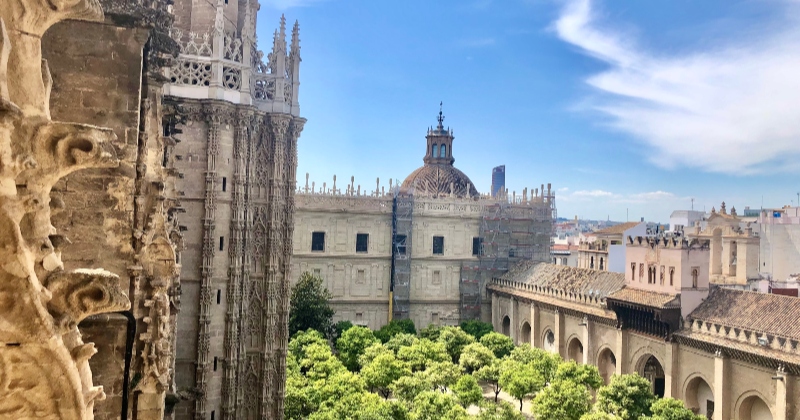 In true Reconquista Christian style, the mosque that once stood in the cathedral’s place was torn down in 1401 to make space for the enormous ‘new’ structure. It took over 100 years to build and features the tomb of Columbus and the Giralda Bell Tower, which offers an impressive vista of the city. The 330-feet bell tower is a late Moorish minaret, used previously to call Muslims to worship. At the top, the bronze statue and weathervane is an emblem of the Christian ‘Triumph of Faith’. Legitimately, no architectural construction in the city centre is allowed to be taller than the statue. 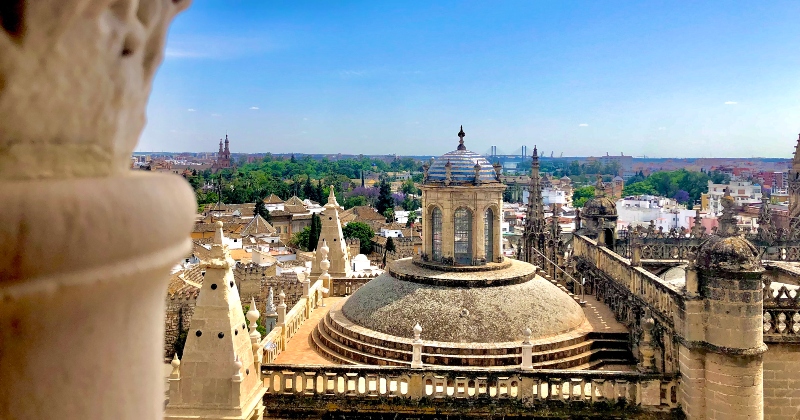 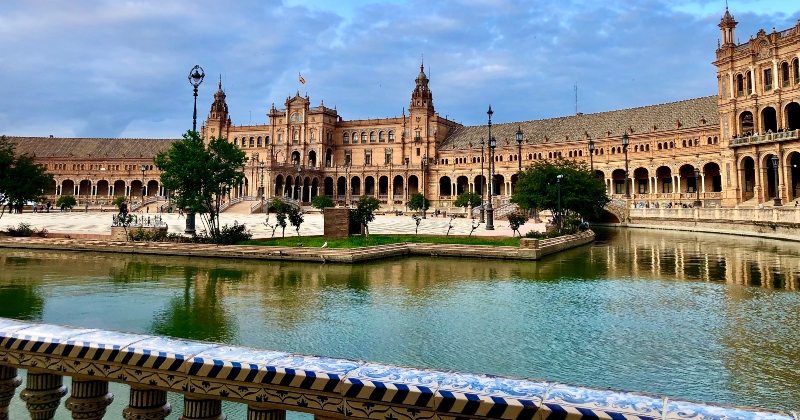 A little walk away from the two big tourist sites, you’ll find the María Luisa Park, which provides a refuge point from all the busy comings and goings. It was devised in the image of the ‘Moorish paradisical style’, and takes you to an oasis of tiles, fountains, and pavilions. The collection of different tree species and chill vibes create the perfect spot to relax in the shade on a hot day. 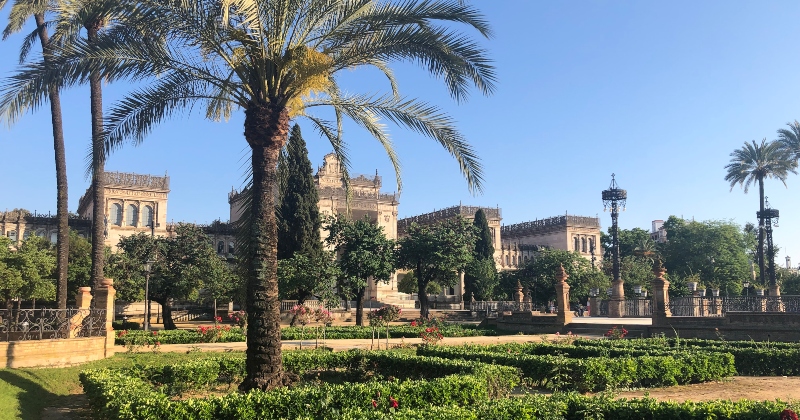 The Plaza de España is situated in the park and is a must-see. It’s a fantastic sample of Regionalism architecture and a mishmash of Spanish architectural styles. This grand square was constructed in 1928 to inaugurate the Ibero-American Exposition. From moats with bridges depicting the ancient kingdoms of Spain to the Vicente Traver fountain and tiled alcoves displaying all the provinces in the country; there’s a lot going on here. The Plaza is a bit of a celebrity having starred in Lawrence of Arabia and Star Wars. 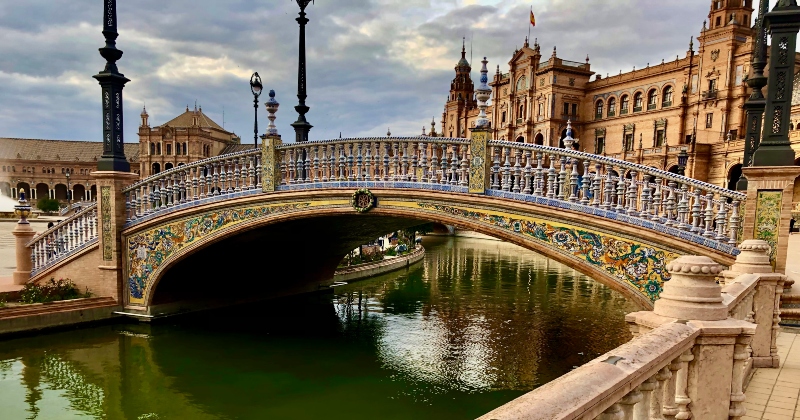 The architect of this magnificent masterpiece was Aníbal González and three artists created a statue to celebrate his achievement which stands opposite the square in the park. They also secretly hid three hands on the statue to commemorate their three newly-born children. See if you can find them. 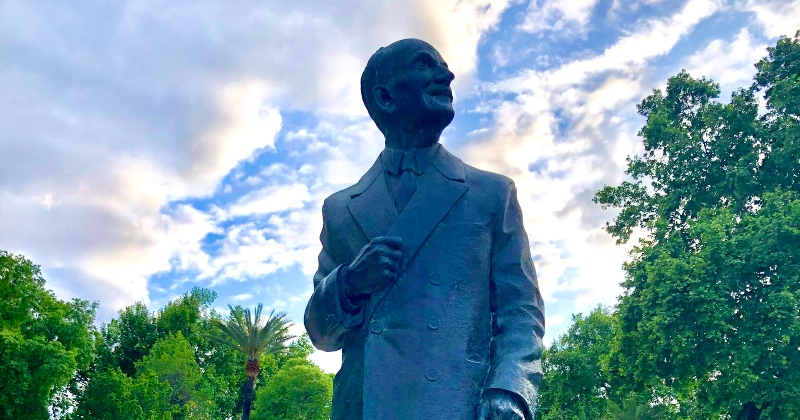 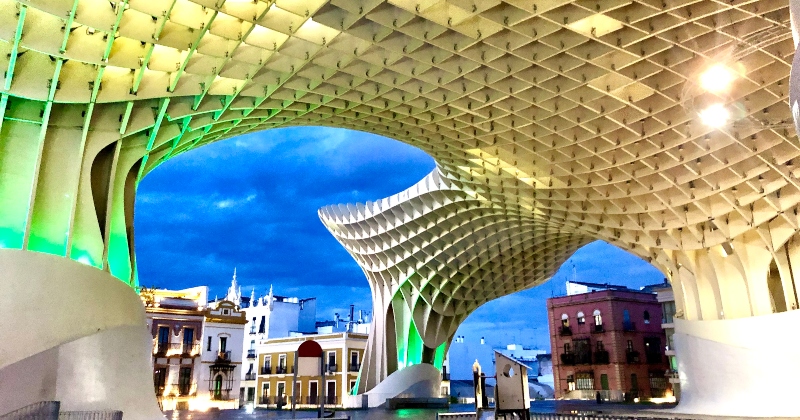 To get a spectacular view of Seville, head to what is locally called ‘Las Setas’ translated as ‘the Mushrooms’, due to its appearance. As the biggest wooden piece of architecture anywhere, it gives the city a modern flare. It acts as an enormous parasol and a great viewing point. Underneath its ‘mushroom cap’ is a food market and museum with Roman remains. The construction project caused a stir and cost an obscene amount of money to build. But at night-time, it lights up in pretty colours and is a popular hangout spot. 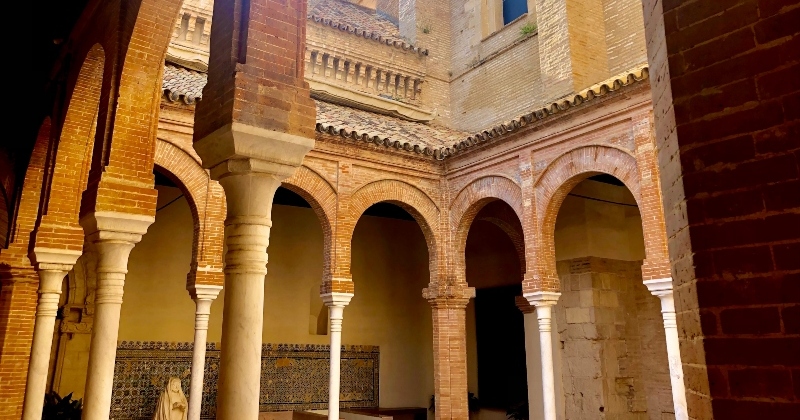 For a break from all the historical sites, CAAC provides something a bit different. It’s a 16th to 18th-century monastery, turned 19th-century ceramics factory, turned contemporary art museum. The buildings where the fresh exhibitions are held add an interesting twist to the art displayed. You’ll find abstract paintings, sculptures, and documentary films in amongst tiles, abandoned chapels, and old chimneys. And the serene gardens provide solace from the hustle and bustle of the city. 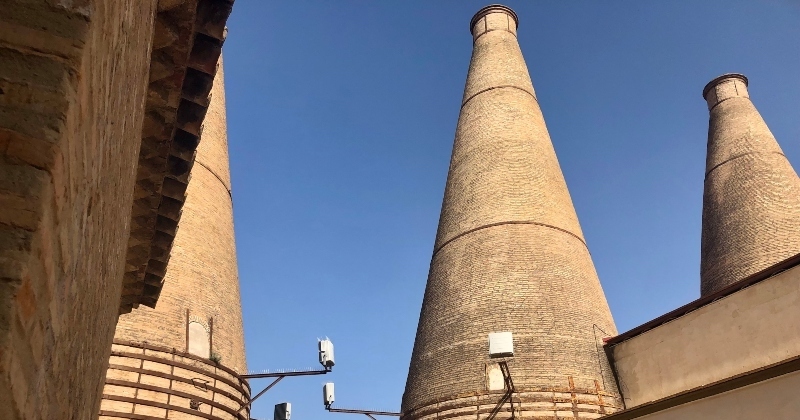 6. The Museum of Flamenco 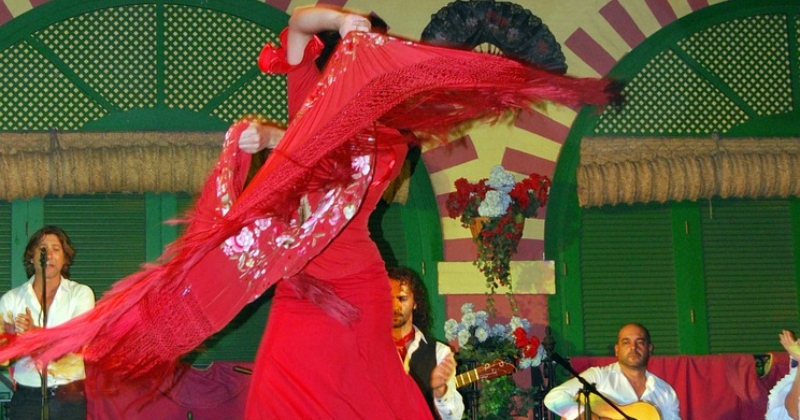 If you’re interested in finding out more about the flamenco tradition, this is the place for you. Small in size, it covers the dress, music, and culture, and gives you the chance to experience the real thing with their evening concerts.

We’ve come full circle and back to where we began the journey through Seville; we’re back to talking about Hercules. As mentioned earlier, here you’ll find the Roman columns with Greek gods positioned at the top of them. The square surrounds the columns with bars, lounges, nightclubs, and cafes. The perfect spot to find delicious tapas and enjoy a lively atmosphere. 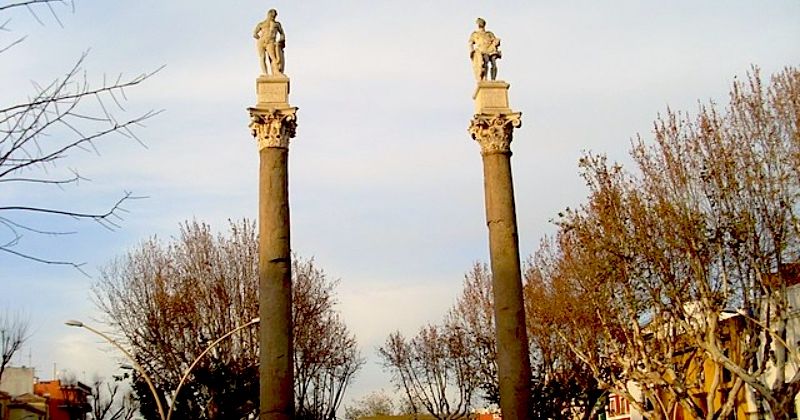 Seville is a gem, or should we say a ‘pearl’. There’s nowhere quite like it, so it’s no wonder it attracts so many visitors. With the launch of our European tours, Rabbie’s now takes you to this fascinating destination. And we hope our guide helps you explore the city to the fullest on your Andalusian journey.

The Many, Many, Destructions of Dunnottar Castle
Rabbie

The Dragon: Everything You Need to Know About the Welsh National Animal
Marishaw

How to Celebrate Burns Night Like a True Scot
Rabbie

The Story of Bibury and the Yellow Car
Rabbie