Shane Fraser on: Whisky, Wolfburn and the NC500

Wolfburn is one of North Scotland’s newest distilleries. It’s been producing some very fine spirit that promises a lot and delivers even more. I speak to Shane Fraser, distillery manager and master blender at the Wolfburn Distillery in Thurso, Caithness. 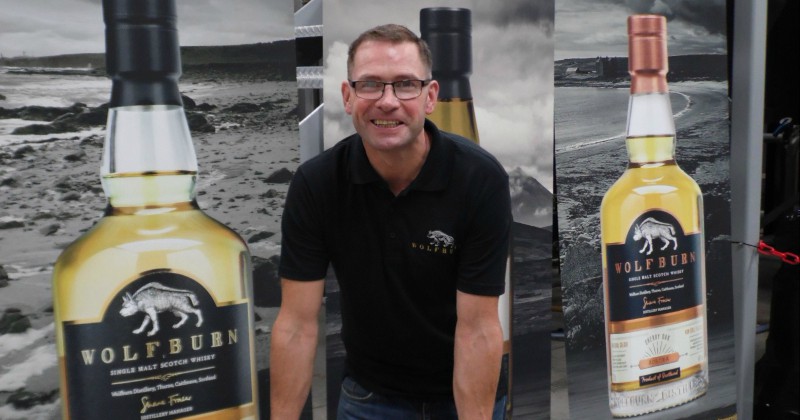 Hi Shane, tell me a little about your role here at Wolfburn Distillery?

Well, I’m the distillery manager here at Wolfburn, and I pretty much have a hand in everything in the distilling process. The cask choices, the bottling, as well as all the paperwork involved, I’m involved with making sure we have consistency in the spirit we produce from administration to bottling all the way to the customer.

And am I right to think you have the role as master blender as well?

Yes, so my role in very much all of these things is rolled into the title of distillery manager.

So how did you come to work at Wolfburn?

I literally just applied for it; I was working at Glenfarclas at the time and really fancied the opportunities this role would give me. Everything appealed to me, starting a new distillery really was a “must-do” in my career. The role itself is great, relaxed, and I have a really good work/life balance. So yeah, I applied, and the owners came in from Cape Town for the interview, and I was given the job a wee while later.

What drew you into the whisky distilling industry?

Well, it has to be said it wasn’t my original plan. I was going to go to college and study but then I got a summer job as a distillery tour guide which eventually led to me being offered a full-time job. It entailed a real mixture of distillery work; from repairing casks and sweeping the yard to basically being a general dogsbody. That was in Oban, and then later I became the manager up at Glenfarclas Distillery.

What would you say is the best part about working at Wolfburn?

The variation in the role is what gives me a lot of satisfaction. Most managers would usually spend most of their time sorting compliance and paperwork but the job here is far more hands on. It’s also great having a sense of balance between work and downtime. The job is so good I actually enjoy going to work.

Brilliant to hear. As they say, if you enjoy your job you’ll never work a day in your life. So, like any job there are difficulties to work through. 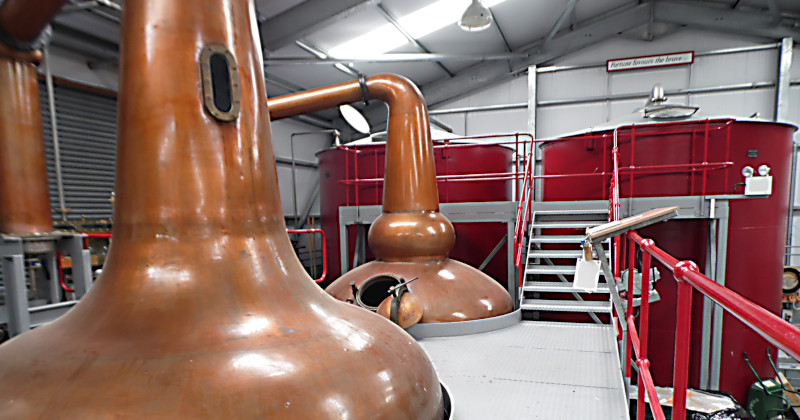 Have you faced any particular challenges here at Wolfburn?

I think the fact that we’re starting a distillery, and wanting to get things right, has been a challenge. We want to create a really good product, an excellent spirit. Thankfully, we got our spirit where we wanted it within a few runs. The challenge in particular to starting this project, was ensuring everything was finished and getting the spirit running in time to meet deadlines. Luckily, it was under a year when we filled our first cask, which is pretty good going.

What do you think makes a good single malt?

Good question, so many things come into play. I think most importantly the spirit needs time. Throughout the process from the distillery attitude, the fermenting, the distillation; it all needs time to work. I would also put a huge emphasis on the quality of casks. You need good casks if you’re wanting a good spirit. You can have the best spirit in the world, but if the casks aren’t of good quality then your final product won’t be as good as it could be. A good warehouse is also important to get that consistent maturation. Honestly, I don’t think age matters, young whiskies can taste better than more mature whiskies if they’re made right. As for taste and character of a whisky, I would say something not heavy would be my character preference. I like a nice maltiness with a hint of sherry; that’s perfect.

Do you think the introduction of the route North Coast 500 (NC500) has had an impact on the distillery here?

Absolutely, we’ve noticed a really big increase. I’m not sure of exact figures, but I’m sure if we looked at the paperwork, we would see a significant climb in interest since the NC500 started becoming popular. At the moment, we see 40 to 50 people a day coming into the distillery to buy our spirit and to get a tour which for a new distillery is really good going. With time we’ll get busier, and I think it’ll be the same with other distilleries around the NC500. I do think the tourism interest from the NC500 is generally good for the whole area.

There has been a significant rise in gin consumption in recent years, a resurgence maybe, has this had an impact in the whisky industry?

No, I wouldn’t say so. Gin appeals to a very different drinker and the two products really aren’t comparable. 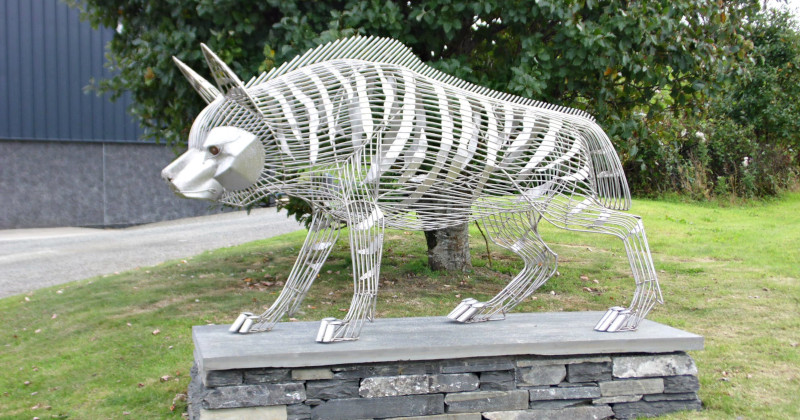 Would you ever diversify and produce a Wolfburn gin?

No, I don’t think so. We were given the opportunity at the start but no, we were always very clear that our aim was to make our whisky.

Does Wolfburn have any plans to tap into whisky tourism?

Well, tourism with an interest in whisky has just kind of happened. The distillery is open for visitors, and we offer tours, Monday through to Friday. Charlie Ross, a retired policeman also is available for booking tours, at any time of the week. We also have the new signs outside to direct passers-by to us. I guess we’re slowly getting involved with tourism, but it wasn’t the original plan; We always said that we wouldn’t be an open distillery or be involved with tourists, but the NC500 changed our minds, seeing as it was on the doorstep. We’ve had opportunities to showcase our spirit at different shows around the area. This year we will be at the Mey games and the Halkirk games, as well as couple other wee shows. It’s quite good because these shows give publicity and people can learn more about what we’re doing.

So yes, I guess maybe it’s not an actual strategy but we’re just slowly tapping into outlets to get our product out there. We have run promotions through social media which is always a good way to get the word out.

Where do you see Wolfburn in 10 years’ time?

To be honest, I think we can only go from strength to strength. We have a good spirit, we’d like to see that develop and hopefully produce something with an age statement which I know a lot of customers like. It really will just kind of, take-off from there. We’re only going to get busier! We’re hoping to introduce miniatures at some point, so, watch this space.

What is your favourite food whisky pairing?

Something I have really enjoyed is the pairing of crystallized ginger. We used this at Oban and it’s been one of my favourite whisky pairings ever since. Admittedly, whisky and chocolate also go well together. I also found that in Japan they swear by soda water in whisky. I’ve tried it in the “Northland” and it really elevates the taste and the character; definitely worth trying. 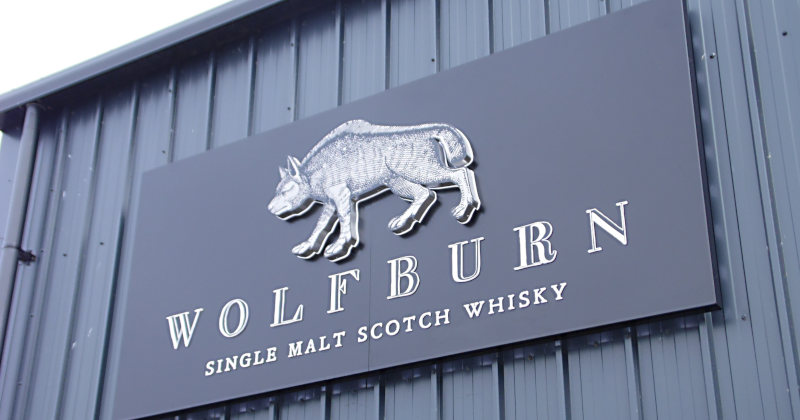 And finally, who came up with the branding of Wolfburn?

There were a couple of artists who collaboratively came up with the idea. They were friends of the owners and it just stemmed from there. The branding really works for us and I know the wolf appeals to the German and Scandinavian customers, in particular. Our design guys really got the branding with the bottling bang on and it definitely helps to sell it. We’d quite like to see our spirit in the travel retail market. Already when I’ve been on trips, I’ve seen Wolfburn in airports. Japan are mad for it and I was recently in LA and found some Wolfburn. It’s crazy to see something you’ve worked on thousands of miles from home. It really makes me proud of what we’ve accomplished so far.

Thank you for your time, Shane. Great to hear of some of your work here at Wolfburn and I wish you all the best on the next chapter of the distillery’s evolution!

Jacob Marker is a whisky enthusiast and blogger from Perthshire. He enjoys being outside in the Scottish Highlands and loves savouring a wee dram with friends. When he's not writing about whisky he is an Adventure Tourism management student and spends much of his time reading about sustainable and ecotourism.