The Edinburgh International Festival's Opening Event was Right as Rain

Outdoor events in Edinburgh are risky. Because you never know if the weather is going to be good, bad, or just plain crazy.

Nevertheless, Deep Time, the Edinburgh International Festival’s opening event, took this risk. The event had planned to celebrate millions of years of history by using the Edinburgh Castle as a canvas for a series of beautiful projections. But in the afternoon, the weather didn’t look good.

Winds blew all day and it started raining in the early evening. It was enough to make you wonder whether it was going ahead, and whether the walk into town would be worth it.

But then, just as the gates opened, the sun appeared. The photographers arrived and the crowd felt relieved. 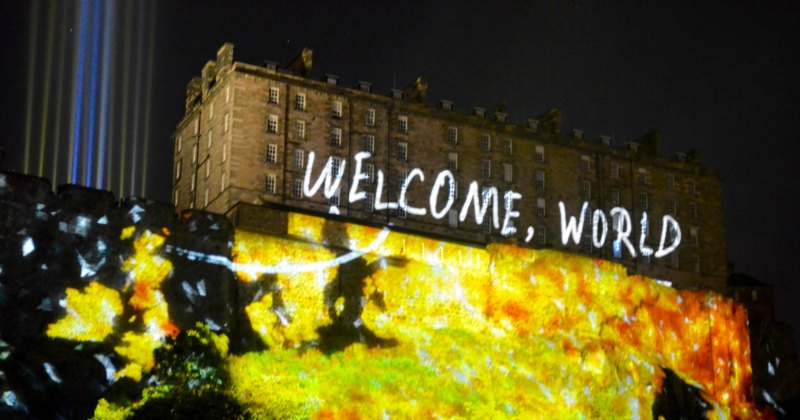 By 10pm, a hush came over the crowded streets under the western side of Edinburgh Castle, and a large ticking antique clock appeared projected on the castle wall. In 30 minutes it would start. The event was going to pay tribute to the ideas of one of the most important thinkers of the Scottish Enlightenment, James Hutton.

James Hutton developed the theory of Deep Time. His theory argued that the earth was constantly being formed through the changing layers of erosion and sediment; it argued that the earth had been in existence for over 4 billion years; a pretty revolutionary concept in a time before Charles Darwin was even a twinkle in his father’s eyes.

And Edinburgh is the perfect venue to celebrate this concept. It’s a city scape of volcanic rock, glacial valleys and distinct land formations that have amazed visitors for centuries.

It’s not the first time Edinburgh Castle has been used as a giant movie screen, with the opposite side often featuring images as part of the Royal Edinburgh Military Tattoo. Yet this event brought it to a whole new level. The culmination of 42 projectors, 15km of cables, a talented team at 59 Productions and the epic music of Scottish band Mogwai came together for this free ticketed twenty-minute performance that thousands of people were now buzzing for. 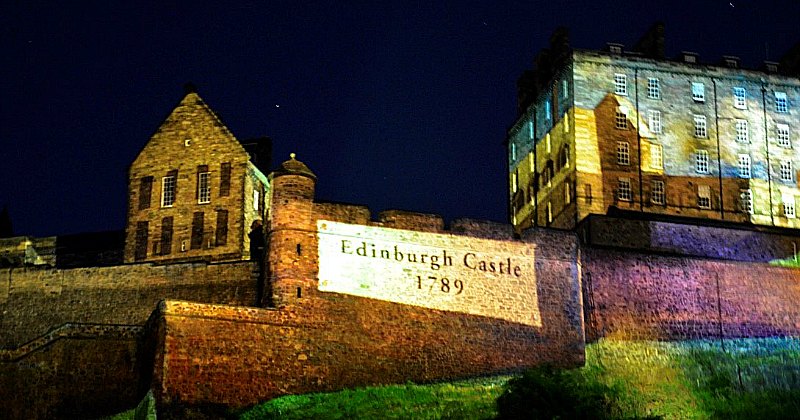 As the ticking clock melted away, the entirety of the western side of Edinburgh Castle was lit with an image of itself. The story of Deep Time commenced. We were carried back through the history of Edinburgh Castle and the castle rock; but in the end it all tumbled away to darkness and began again with the very heartbeat of time itself. It’s one of those events that words or pictures can never really describe.

Volcanic eruptions, crashing tectonic plates, the beginning of organic life, and the fossilisation of animals were all projected onto Edinburgh Castle in a whirlwind of colour. Mogwai’s soundtrack blended seamlessly into the visuals, creating a truly immersive experience. 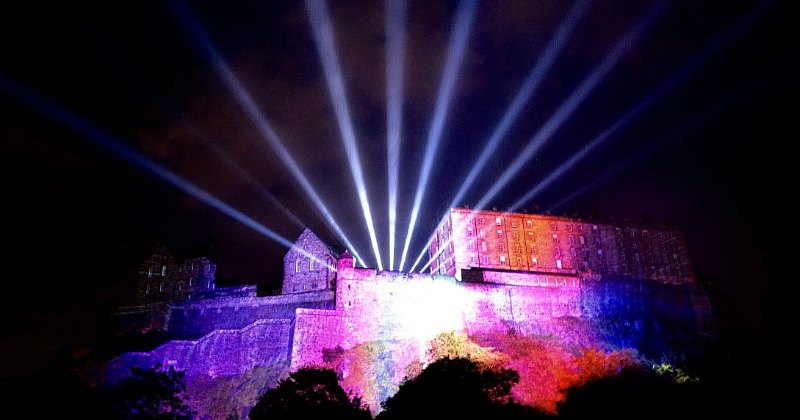 It ended back in the present day. A huge beam of light disappeared into the night’s sky with the words ‘Welcome, World’. The crowds hushed once again and any worries about the weather was forgotten as the audience tried to take in what they’d seen.

A high quality video of Deep Time can be viewed on the Edinburgh International Festival’s website and Facebook page. It’s a great start to what’s bound to be another great Edinburgh Festival season.

Sonja is a travel blogger sharing her travel and expat adventures at Migrating Miss. Originally from New Zealand, but a serial expat since 2004, she loves to talk all things travel, especially if it involves helping other’s to achieve their travel dreams and better if it involves going for coffee and cake. Follow along on Facebook @migratingmiss.