Beaches, Wellingtons, and Star Wars: My Trip to Dingle

As the Director of Rabbie’s New Operations Development, one of the privileges of my job is imagining new trips and looking at how to make our tours even more enjoyable.

One recent research trip took me to County Kerry in the far South West of Ireland (it’s the squiggly-jaggy bit at the bottom left of your Ireland map). I knew it would be an unforgettable treat, because I was going with my colleague, David, who comes from the local town of Tralee. 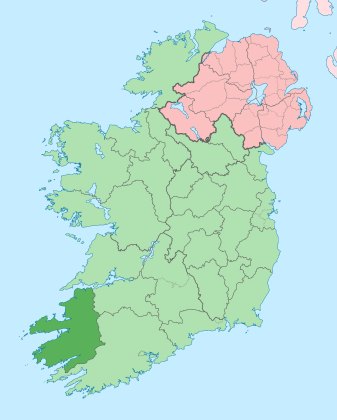 And what David doesn't know about Dingle, isn't worth knowing.

So, we set off from his hometown towards the distant mountains of the Dingle Peninsula.

Immediately, a windmill surprised me. The Blennerville Windmill overlooked the Bay of Tralee and looked out of place in this watery landscape. But David assured me it served a useful purpose in a bygone era. 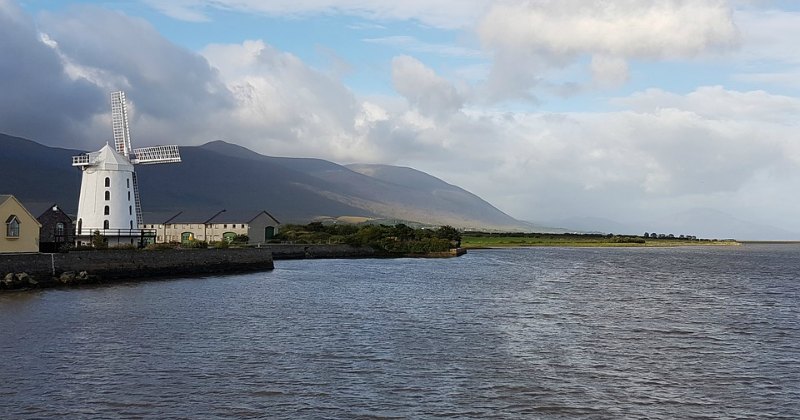 Shortly after, a local farmer and his sheep dog literally stopped us in our tracks. A friendly wave from the farmer and we’re on our way again. I smiled and thought ‘I could get used to traffic jams like this…’

We took one of the mountain passes to the south side of the peninsula and continued towards the town of Dingle. I was surprised to find a bustling town with many international visitors wandering around the brightly painted shops. 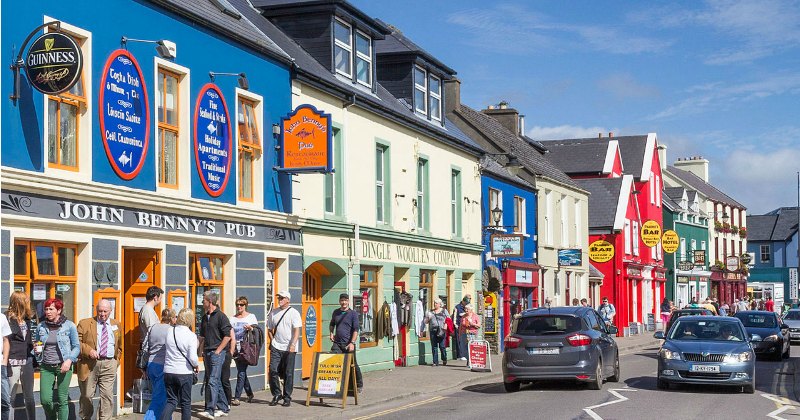 Dingle sits next to a sheltered bay complete with its own resident Dolphin, known as Fungie. There are boat tours that take visitors to the bay where Fungie has lived for over 30 years. Fishing boats were moored in the harbour, and pleasure craft bobbed up and down in the marina. David reminded me France is near, and sailors from the other side of the Celtic Sea often drop anchor in Dingle during the summer. 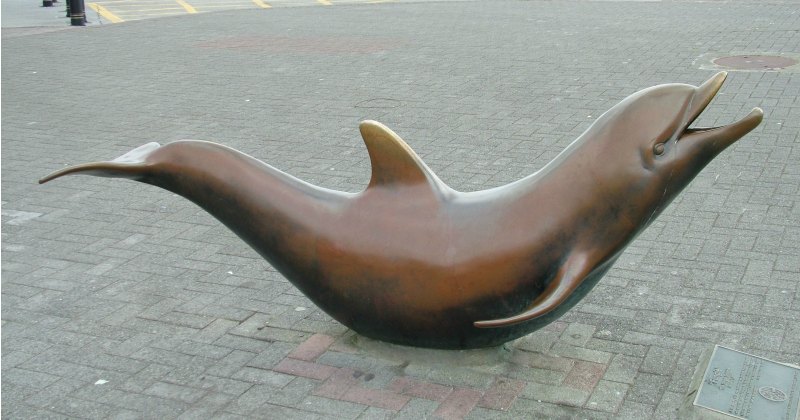 We continued along the Wild Atlantic Way, a walking and driving route that stretches from Donegal to Cork. Today the name was apt, because we witnessed huge wild waves from the Atlantic Ocean throwing up puffs of white foam that floated on the wind.


At Minard, we saw the ruins of a castle next to a beach strewn with huge boulders that had been washed up by the Ocean. 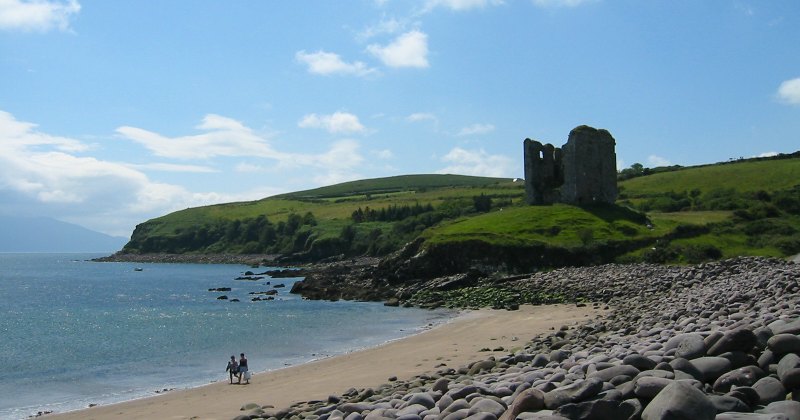 I admit, I’m not fond of heights, and at our next stop, I couldn't quite bring myself to the edge. These cliffs overlooked the near vertical sheep path at Dunquin Pier that’s still used by farmers who transport their sheep from one part of the peninsula to another.

As we reached the most westerly point of our journey, I could see the Skellig islands where parts of the Star Wars movie, The Force Awakens, were filmed. The Dingle peninsula was also used in the production, and temporary film sets were constructed in several remote locations. 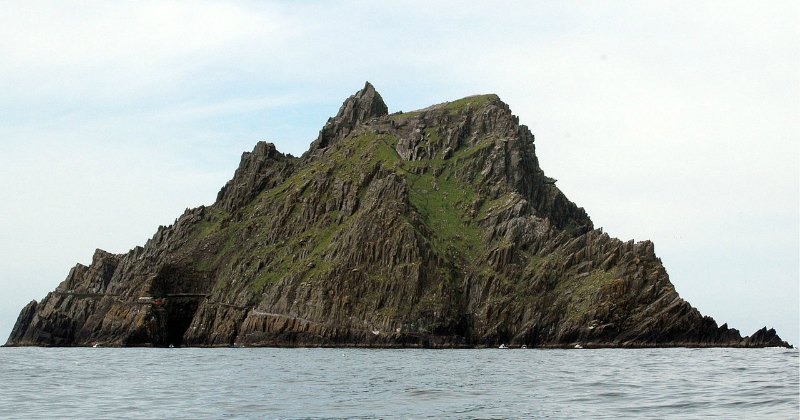 Our next stop was at an ancient fortress constructed with the local stone that litters the landscape. There was no cement or lime holding this together, just well placed stones that had survived the Kerry weather for 800 years. This was once home to the deacon of Dingle, who collected taxes from the local population on behalf of the Catholic Church.

It was time for a late lunch, so we travelled back to Dingle town and had a hearty bowl of Irish stew in one of the harbour front pubs. Served in a steaming bowl, our stew was the perfect antidote to the rain that was blowing at various times of the day. 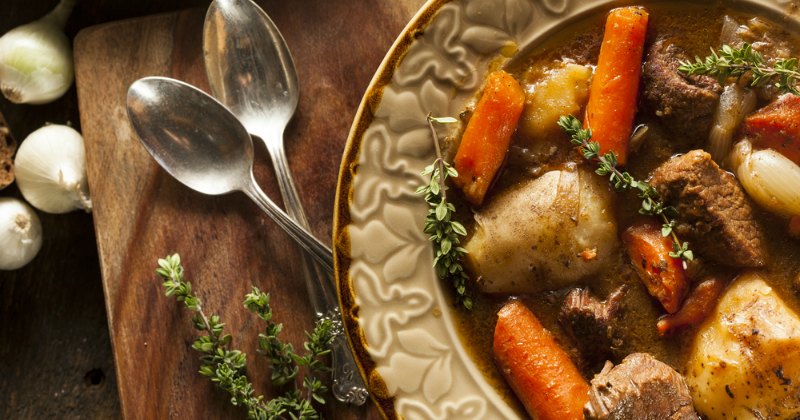 Later, we walked through town and stopped at Dick Mack’s Shoe shop and bar. It must have been the only time in my life, I could drink a Guinness while buying a pair of wellington boots. I wasn't in need of a pair of Wellington boots, so I stuck to a pint of stout. We sat and talked with the owner, a dapper gentleman who explained the snug bar with the open fire was once his study. He said his bar is a place for conversation, so there's no television showing sports events or 24hr news. And the only time there's music is when locals bring their instruments in on a Monday afternoon to entertain themselves. It was my type of bar. 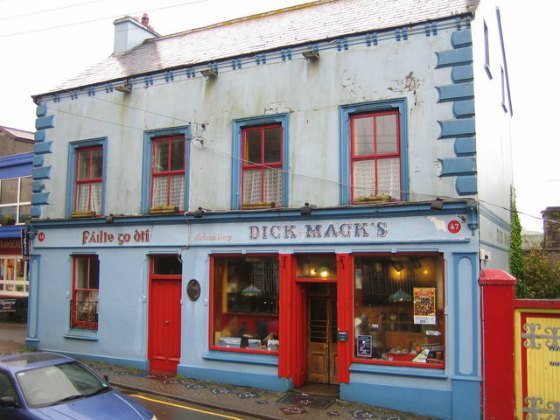 It was here I learned about the Wren's Day celebrations that take place in Dingle on 26th December. This is when the locals dress up in costumes and parade through the town with pitch forks and peat lanterns ablaze over their heads. They inevitably end up in many of the town’s bars and the festivities go on until the early hours of the next day. This festival takes place in several locations in Ireland, but I’m told the events in Dingle are the best in the whole country.

We said farewell to the owner and backpackers we met, and continued over the Monar pass. This road is so high we touched the clouds. Of course, this isn't great for the views, but as we descended out of the clouds, I caught a glimpse of the views I’d missed from the top. The valley floor lay hundreds of meters below us. Lakes dotted the landscape and Brandon beach could be seen curving round the bay for many kilometres. This breath-taking scenery satisfies the soul on an almost spiritual level.

We stopped for water in the remote community of Ballyferriter, where a shopkeeper and local farmer were deep in conversation in the Gaelic language. This is the heart of Gaeltacht, where English is the second language, but where visitors always receive a warm welcome. 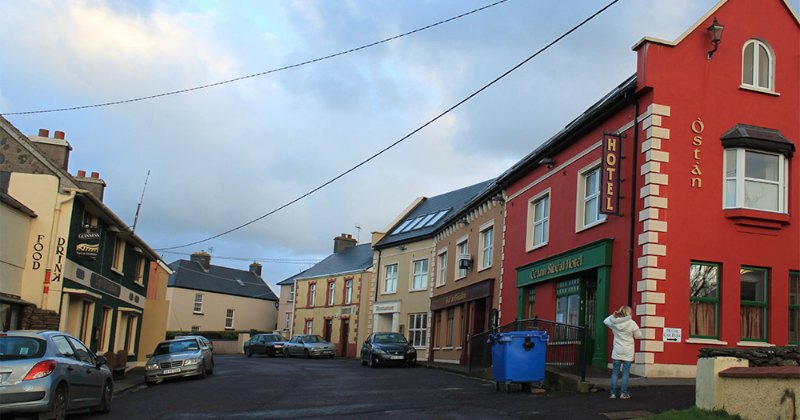 As the light began to fade, it was time to leave the peninsula and return to Tralee. I had experienced the Wild Atlantic Way, the misty mountain passes, the abandoned castles, the stone forts, and the golden beaches. This is what I came to see, but it's the people I met who added real depth to this experience.

As I now sit in the airport reflecting on what our Dingle tours can do better, the answer must be: not much! Dingle has it all and truly delivers the best of Ireland.

If you only visit once, you’ll be captivated. And as they say in the Star Wars movies that have a close association with Dingle: “The force is strong”.

And this makes me think of the strong pull of this peninsula. And I for one know that I’ll be back.